New war memorial to be placed in hospital garden 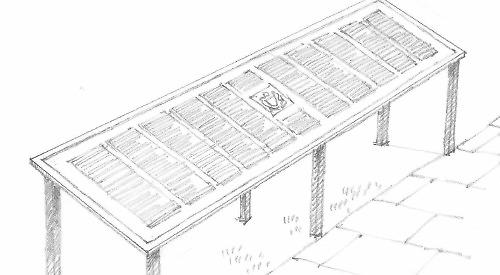 A MEMORIAL honouring every serviceman from the Henley area who died in the First World War is to be installed at Townlands Memorial Hospital.

The new polycarbonate plaque, called The Great War Memorial, is the culmination of a five-year campaign by the Lest We Forget project, led by amateur historian Mike Willoughby and his wife Lesley, from Woodcote, to honour the “forgotten” servicemen.

It will be 8.5ft wide and 2.6ft deep and feature the names of all 312 soldiers from Henley and the surrounding villages who lost their lives in the conflict with the Lest We Forget logo in the centre.

The names will include 13 which have been found and researched by the couple since three memorials were installed at Henley town hall and Holy Trinity and St Mary’s Churches in the early stages of the project.

The plaque will be located in the south-west corner of the lawn at the rear of the hospital complex, off York Road, and will be accessible by wheelchair.

The Willoughbys hope that Tim Stevenson, the Lord Lieutenant of Oxfordshire, will unveil the plaque in November, which will mark the centenary of the end of the Great War.

Since 2014 Lest We Forget has discovered the graves of soldiers, held numerous exhibitions and placed poppy plaques in homes and businesses around Henley where the town’s fallen servicemen once lived and worked.

It also ran a successful campaign to rename the new £10 million hospital, which opened last March, after the town’s old War Memorial Hospital, which cost £20,500 and was paid for by public subscription.

The wooden memorial from the old hospital is now in the new one.

Amber Infrastructure, which rebuilt Townlands, has agreed to pay for the memorial, which will cost £3,173.

Mr Willoughby said: “They gave us a budget to work to and then I went off and designed the memorial based on the original plaque that was installed in the town hall.”

He was helped by designer Pete Webb, of Higgs Group, publishers of the Henley Standard. Street Furnishings, of Wargrave, came up with working drawings and will make the plaque and Chissock Woodcraft, from Hare Hatch, will mount it and frame it in an antique oak frame. Purdy Gates, of Woodcote, will make the metal frame that will be sunk into the ground.

Mr Willoughby said: “I would like to see it unveiled in November but not to clash with normal remembrance events.

“Although, theoretically, the project will go on as long as I draw breath, officially it will end this year and the unveiling of the memorial will be an amazing culmination of what has been a privilege to research.

“I’ve been lucky enough to have 50 more fantastic years than these soldiers ever had. They were cut off in their prime.”

Mrs Willoughby, the project’s treasurer, said: “We hope the public will see it as a quiet space to reflect and remember.”

The war memorial hospital was opened on June 3, 1923 to honour those who died in the war. It closed in 1983 and was then demolished and the land sold.

Money from the sale was earmarked for the redevelopment of Townlands but this only began in 2014 — more than 30 years later — following a long campaign.

Mr Willoughby said it would be fitting that both memorials would be at the same place, adding: “The generation of the people of Henley to whom it actually meant something is swiftly passing.”

The couple initially put forward the idea of a memorial garden within the grounds of the new hospital but decided not to pursue this on the advice of NHS Property Services, which owns the hospital, due to the maintenance required.