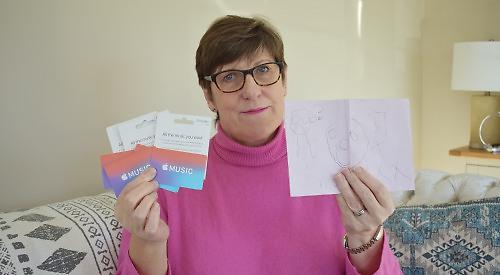 A MOTHER is upset after her disabled son was able to spend almost £400 on gift vouchers.

Barbara Carr, of Swiss Farm, Henley, found that 30-year-old John, who has learning difficulties, had bought four iTunes gift cards at the W H Smith shop in the town centre.

She tried to return them after seeing he had paid £99 for each of the  “all the music you want” vouchers.

But she was told by staff at the Bell Street store that they were prohibited from giving a refund under the terms and conditions printed on the back of the cards.

Apple, which owns iTunes, has said it will not refund the money.

Mrs Carr, 60, an Ofsted inspector and education consultant, said she wanted a change in the law so goods such as expensive gifts cards are only sold after shop staff have taken precautions.

She said: “This has alerted me to the fact that vulnerable people have insufficient consumer rights.

“There is a lack of empathy for the people who are trying to make their own way in the world and need a bit of support.

“These large organisations are turning their back on the most vulnerable people in society and we need to push them.”

Mrs Carr  said new rules were needed to protect vulnerable people when making this type of purchase as they may not understand the terms and conditions.

She said: “Vulnerable people are being tempted to buy these goods.

“John can’t read so the terms and conditions are not stated to him. Clearly he did not understand what he was purchasing as he bought four unlimited streaming vouchers.”

Mr Carr, who works at Wyevale garden centre in Playhatch, has been looking after his own bank account for nine years. He keeps all his receipts so his mother can check them. When he buys something expensive he normally asks permission and is given help by an assistant.

He will also phone his mother or father Russell to check everything is okay before making the purchase.

Mrs Carr  checks her son’s bank statement every week, which is how she discovered he had bought the gift vouchers. She said: “Vulnerable people can be elderly, suffer with dementia or be disabled so they don’t understand how easy it is to get into this kind of financial situation.

“John had some issues with HMV when buying CDs but you could take the receipt back with them and they could see he had four of the same CD.”

Mr Carr did not register for unlimited streaming so his iTunes account was credited with the amount he paid. He has used most of this on downloading songs. Apple has offered to delete the transactions and return the money to his iTunes account, so he would have £396 credit.

WH Smith has offered a 10 per cent refund.

Mrs Carr said: “I think they are missing the dangerous aspects. I want to raise awareness of this because a vulnerable person has made a mistake.

“There should be a limit on how many high-ticket items they can sell.

“In the absence of the buyer being able to read there should be a check to see if they properly understand the terms and conditions.

“It is more difficult to buy alcohol, fireworks or cigarettes than it is to buy these vouchers.”

Mrs Carr said she was worried that if her son was not living at home and instead having to support himself, how this would have affected his finances.

She said: “He would have spent all his wages. He spent £400 on fresh air and would not have any money to feed himself or pay rent or bills.

“At the moment I look after him and keep an eye on him.”

She wants a law to make it compulsory for shops assistants to tell customers about terms and conditions and refund policy.

Mrs Carr also wants the cards locked away and only able to be purchased on request.

She says these measures would help protect the vulnerable.

“I know certain stores have scripts for other items,” she said.

“I asked about this and they say they don’t have time to do it.”

A spokeswoman for Apple said the company did not comment on individual customer cases.

WH Smith did not respond to requests for comment.