Shoppers back Oxfam shops despite scandal 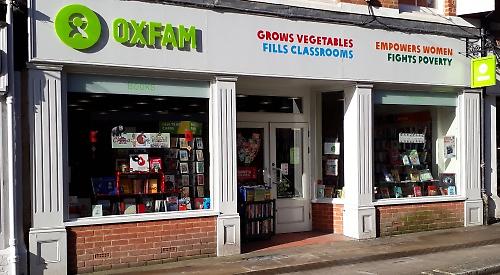 SHOPPERS in Henley are continuing to support the town’s Oxfam shops despite the charity’s sex scandal.

The shop in Market Place and bookshop in Duke Street both say that customers have not stopped visiting despite revelations that senior aid workers had paid local women for sex in Haiti.

Oxfam is accused of concealing the findings of an investigation into the claims that Roland van Hauwermeiren used prostitutes at a villa rented for him by the charity after the country’s 2010 earthquake.

This has led to further accusations that teenage volunteers at UK Oxfam shops have been abused.

Penny Lawrence, the charity’s deputy chief executive, has since resigned, the Charity Commission has launched a statutory inquiry and the Government has threatened to withdraw its £30 million funding.

Sabine Adams, manager of the bookshop, said the number of customers had not dropped and many had pledged their support.

She said: “We’ve all been very upset by the news and hope it will get sorted but the general feedback from customers has been supportive. They still believe in what Oxfam does despite the actions of a few individuals who have misbehaved.

“I’ve had text messages and customers coming in being really touching. I was in Oxford on Tuesday and the stores there had had the same reaction.

“It’s upsetting because I’ve got more than 50 volunteers here working very hard every day of the week.

“We have nothing to do with it but we do represent Oxfam and are the face of it on the high street.”

Volunteer Veronica Treacher, from Rotherfield Peppard, said the mood in the shop had been affected.

“Those of us who work there try so hard to make money for Oxfam so it’s the most unfortunate blow,” she said.

“It’s inevitable that people will feel uncomfortable but whether there will be a fall-off in volunteers in our shop I can’t tell. So many people have worked there for so long but I’m sure some are considering their positions.”

“Only one spoke of the news to me and that was a fairly casual reference,” she said. “We have a very loyal clientele at the shop, perhaps rather than Oxfam as a whole, and we’ve had a lot of donations this week, which are what we thought might be affected.”

Eszter Csibine, who manages the Oxfam shop in Market Place, said: “It was upsetting to hear this news. We were shocked.

“I hope the truth comes out and that Oxfam can clear out what needs to be cleared out from the system.

“We really are here to help people who are struggling.” Shopper Wendy Peters, 60, a civil servant of Greys Road, Henley, called the scandal “shocking”.

“Government funding should stop immediately,” she said. “But I wouldn’t like to see the reputation of the charity tarnished — it’s always the minority that causes the biggest problem.”

Linda Walker, 63, from Hurley, said: “I’d hope that the collective intelligence of the people who live in Henley would appreciate the people who work in these shops do it for nothing and shouldn’t be targeted.

“The world is in such a crisis that it would be a shame to see Oxfam go. I’ve worked for Oxfam at music festivals 10 or 15 years ago and found everyone to be fine.”

Denise Hackett, 57, a carer of Tanners Lane, Chalkhouse Green, said: “Let’s be honest, it’s not all of Oxfam is it? I don’t condone it but the charity does good work and it would be an awful shame if that stopped or if people let that influence their donations. This needs to be investigated and it needs to be more transparent but it won’t affect me donating.”

Geraldine Capps, 77, a retired nurse of St Mary’s Close, Henley, added: “I feel very strongly about using charity shops. I feel sorry for some of the people who work there because they are doing their best.”

Bev Jackson, 65, a carer, of Bell Street, Henley, said: “I just think it’s very sad. It definitely shouldn’t tarnish the whole of the charity for the work of a few.”

Jack Ogden, of New Street, Henley, said: “It would be unfortunate if there was a local blowback.

“The Government and the Charity Commission have to look much more closely at the organisations providing foreign aid to make sure the best practices are in place. There are always going to be some bad apples. It would be a great shame if this impacts on the good things Oxfam does.”

An Oxfam spokeswoman said: “The behaviour of some members of Oxfam staff uncovered in Haiti in 2011 was totally unacceptable, contrary to our values and the high standards we expect of our staff.

“As soon as we became aware of the allegations we launched an internal investigation. Four members of staff were dismissed as a result and three, including the country director, resigned before the end of the investigation. Allegations that underage girls may have been involved were not proven.

“We carried out a thorough review of the case which resulted in the creation of our dedicated safeguarding team and a confidential whistleblowing hotline as part of a package of measures to ensure that we do all we can to protect our staff and prevent sexual abuse and misconduct.”