Birds of prey swoop into library for children's workshop 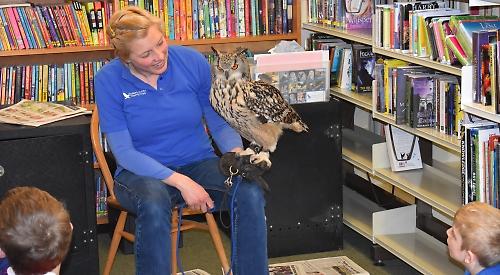 AN Indian eagle-owl called Charlie was among the attractions at a half-term falconry workshop for children held at Wargrave library.

Dozens of children attended the event at the Church Street library on Monday.

Sadie Shepherd, from the Feathers and Fur Falconry Centre in Hare Hatch, had brought along three other birds of prey, Acer the peregrine falcon, a kestrel called Bourneville and a barn owl called Wiggy.

She talked to the children about the birds and let them wear a special falconry glove so they could hold Charlie. Mrs Shepherd said: “Teaching anything about wildlife to children is fantastic and this is a great way of getting them excited about birds.

“We’ve been doing these kind of things at libraries during half term for years and they are always popular. It’s also a good way to get children into the library. Any kind of learning with kids is brilliant and what better place to do it?”

Alfie Allen, 10, held Charlie and said: “It was cool. She wasn’t as heavy as I thought she was going to be.”

Librarian Ros Fernley said: “It’s lovely to have an event like this, especially with these fantastic birds.”