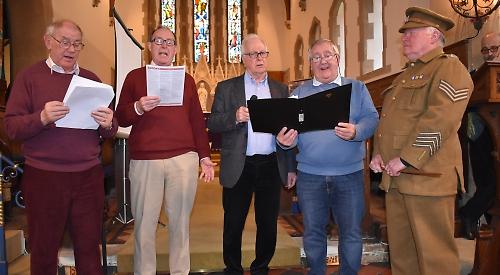 MORE than 250 people attended a snowdrop-themed open day at All Saints’ Church in Dunsden on Sunday.

The second annual event featured singing, music and poetry readings as well as talks on the church’s history during the First World War.

Visitors could buy snowdrops to plant at home.

The event was organised by John Bodman, a former All Saints’ churchwarden and regular worshipper, who has spent the past decade planting snowdrop bulbs in the churchyard. It began with a special snowdrop service written by Rev Robert Thewsey, the rector of Shiplake and Dunsden.

Mr Bodman gave a talk on snowdrops and another on Wilfred Owen, the First World War soldier and poet who served as assistant to the vicar at the church before he was killed in the conflict, aged 25.

Mike Willoughby, of the Lest We Forget project, gave a talk on the fallen soldiers of Dunsden not included on the war memorial while dressed in an authentic Great War uniform. He then led a quartet of Mr Bodman, Maurice Robbins, Alan Appleby and Alan Strong in a performance of traditional songs from the trenches.

Chris Hearn, founder of the Dunsden-based Loddon Brewery, spoke about the history of the business while parishioners including Barbara Winnington and Jean Eastwood read poems and the Shiplake recorder ensemble performed.

Tea, coffee, mulled wine and home-made cakes were served and there was a raffle and a snowdrop hunt for children.

Mr Bodman said the event was free to attend but a lot of visitors bought snowdrops, refreshments and raffle tickets.

He added: “For us, the First World War songs were the highlight as we had never sung together before and didn’t have any rehearsals. It was well received and great fun to do.

“We are trying to illustrate that the church is not all about God, it’s about bringing the community together and letting them meet us.”

The proceeds will go towards installing a stained glass window of Owen at the church.