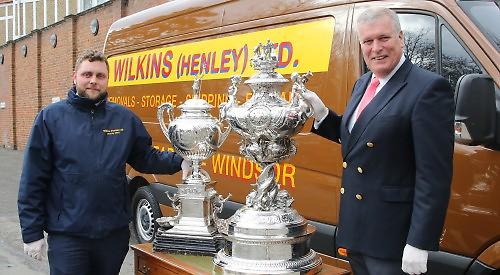 LEANDER Club’s bicentenary celebrations will continue this weekend with a gala dinner in Dublin to celebrate its long association with rowing in Ireland.

To mark the occasion, the two Cork International Cups will return for the first time since the Henley club won them outright almost 120 years ago.

In 1902 Lord O’Brien, the Lord Chief Justice of Ireland, led the organisation of an international regatta with a magnificent trophy for the winners.

Leander beat Berlin in the final and then did the same the following year and the trophies have taken pride of place in the Leander dining room ever since.

In 1904 Leander donated a silver trophy to Cork Regatta and it has been competed for annually ever since. Henley firm Wilkins Removals is transporting the cups for this weekend’s celebratory dinner.

Leander president Jeremy “Rass” Randall said: “Transporting such valuable trophies overseas is a specialist business, so Leander turned to Wilkins to take change of the operation, which they supported financially.”

Wilkins director Oliver Miles said: “We were very keen to offer our support for this historic venture and we are pleased to have the opportunity to bring our experience to good use.” This will be the third time that the trophies have been brought together, but the first on Irish soil.

Robert Treharne Jones, the Leander archivist and Olympic commentator, will be giving a lecture on the history of the trophies at Trinity College and again at the Kildare Street and University Club, where more than 60 Leander members and VIPs will attend the dinner.