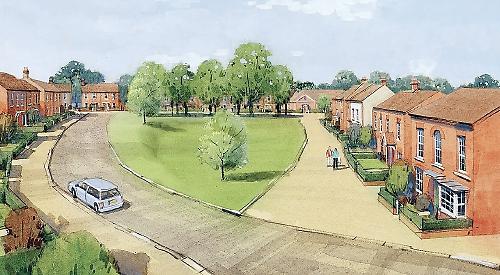 PLANS to redevelop an old garden centre near Henley are due to be submitted over the next month.

Aida Dellal, who owns the former Wyevale site off Reading Road, near Shiplake, is proposing to build up to 40 new homes and an office block on the 4.5-acre plot.

Her son Alex Hersham gave a presentation to Henley Town Council’s planning committee on Tuesday on the latest plans for the site, which is included in the joint Henley and Harpsden neighbourhood plan.

The existing buildings on the site, which have fallen into disrepair and have been vandalised since the business closed in 2009, would be demolished.

Mr Hersham said: “It’s a classic brownfield site which the Government is pushing to bring back into use. Redevelopment is certainly required here.

“Nobody doesn’t want this site to come forward for development. There’s some debate about what that development should be.

“The community clearly needs homes, especially affordable homes, which is why our mixed-use site will have 40 per cent affordable.”

This would mean rents or purchase prices would be fixed below the market rate.

Mr Hersham said 127 people attended a two-day consultation in November on the site with 90 per cent agreeing there was a need for it to be redeveloped.

Seventy-five per cent were positive about the landscaping suggested, while 60 per cent agreed or strongly agreed with a mixed-use development.

It would include a large open green space near the entrance and there could also be a building with office or retail units and flats above as well as a community centre.

Bus stops in both directions could be installed outside the entrance with shelters along with a mini-roundabout and an improved public footpath leading to Lower Shiplake.

The community centre could be occupied by Henley’s air cadets, whose current headquarters in Friday Street, Henley, is under threat of closure as the Ministry of Defence is looking to dispose of it. The site is earmarked for about 10 homes in the town’s joint neighbourhood plan with Harpsden.

Mr Hersham said there would be a gated entrance with signs on the A4155 as the speed dropped from 50mph to 30mph.

Councillor David Eggleton asked if a clause could be included that allocated the affordable houses to people in Henley and Shiplake. Mr Hersham said he wasn’t sure if this was legally possible, but if it was, they would do so.

Councillor Will Hamilton added: “I believe this site does need to be developed, it’s been knocking around for 10 years or so getting green. I think it’s a positive step forward for this area.

“The only thing I’d love to see is a free use tennis court.”

He also queried whether space may be available in the employment area for a council depot.

Mrs Dellal owns the land through her business Dairy Lane and it falls within Harpsden parish. It is next door to Thames Farm, whose owner Claire Engbers has been granted permission for 95 homes on the 14-acre plot despite not being included in the neighbourhood plan.

It is earmarked in the plan for purely commercial development but Mrs Dellal, who lives at Fawley Court, off Marlow Road, and her son say this would not be commercially viable.

She bought the land when the garden centre shut with the intention of providing a new home for the Toad Hall garden centre, off Marlow Road, but the move was scrapped and another occupant could not be found.

It has been vacant ever since, with huge logs permanently barricading the entrance to deter intruders.

South Oxfordshire District Council would make the final decision on a planning application.