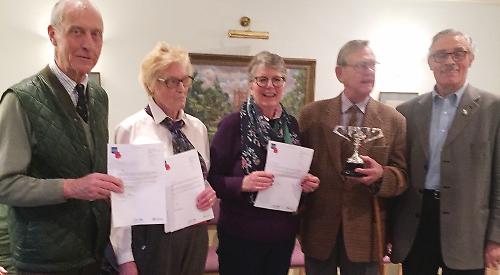 VOLUNTEERS for the Wargrave Poppy Appeal have been honoured for 80 years of service between them.

Certificates were presented to Diane Bush, who has been involved with the appeal for 45 years, Peter Mayes (15 years) and Sue Mayes and Shirley Collie (10 years each).

Chris Kaye was awarded the Poppy Cup for special contribution to the appeal, while the Piggott School received a certificate of appreciation for 10 years of contributing to the appeal.

Last year, more than £11,500 was raised for the appeal in the Wargrave area.

Collections were made door-to-door as well as at schools, pubs, clubs and shops.  David Smith, who chairs the village’s branch of the Royal British Legion, said: “The money is used for running care homes and providing welfare services for veterans and beneficiaries as well as break centres and a wide range of financial support work.

“It does not only support the veterans and families of earlier wars. In Berkshire last year most Legion support was provided to those in need arising from more recent conflicts, men and women who will to need such support for many years to come.

“Thanks are offered to all those who organised or distributed boxes, collected, counted thousands of coins and, especially, those who donated. A wonderful result.”