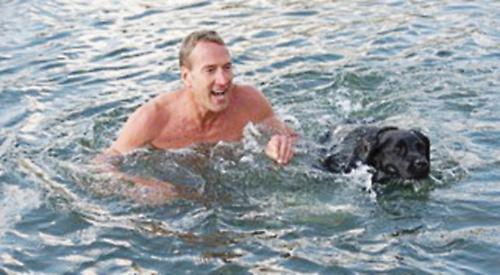 ADVENTURER Ben Fogle rarely shies away from a challenge.

But even he may have wondered what he’d let himself in for when he plunged into the River Thames in Henley on one of the coldest days of the year, accompanied by his labrador Storm.

The former Countryfile presenter was promoting a new series of dog walks.

Fogle has teamed up with pet food firm Harringtons to promote nine “dogventures” across the country to encourage dog owners to to get out more often, whatever the weather. On Tuesday, he tackled a walk inpired by Wind in the Willows, which goes from Station Road across Henley Bridge and along the towpath to Temple Island.

Fogle took to the water in a canoe and then stripped down to a pair of trunks and star-jumped into the river which had a temperature of -5C.

Fogle added: “A dog walk isn’t a dog walk if you can’t take the dog off the lead. There are some wonderful places that dogs can be lead-free but our research has shown that many owners just aren’t aware of the rules.”