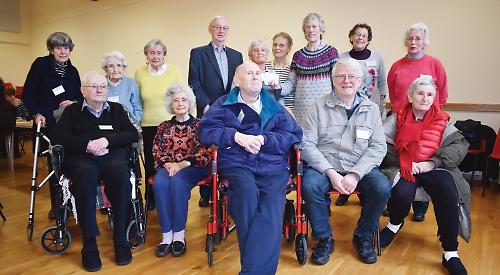 ALMOST £1,500 raised at the ninth annual Henley Choir Festival has been donated to a charity.

More than 250 people attended the festival at St Mary’s Church in January, where eight choirs performed individually and then came togther to sing.

The proceeds are the fourth highest amount raised since the event began in 2009. Mrs Hodgkin, of Nicholas Road, Henley, said: “Every year it’s always quite difficult to find the right charity to raise funds for and I like to think we try to help local people.

“This year’s it’s something personal to me as my brother and my best friend have had strokes.

“It’s important that people know about the stroke club because it’s not just for people who have suffered strokes but their carers too.”

The club, which was founded by Audrey Richardson,
meets weekly and often has guest speakers or a presentation. It also runs monthly trips for members. Chairwoman Veronica Townsend said: “This money will probably go towards our outings and overheads. It’s wonderful and will help us no end. We are really thrilled and it was really nice of Elizabeth to think of us.”

The festival was started by Mrs Hodgkin and Mr Butler, director of music at All Saints’ Church in Rotherfield Peppard, to showcase the choirs and raise money for charity. Since then it has raised more than £12,000 for good causes. The choirs that took part in this year’s concert were St Mary’s, Henley; All Saints’; St Nicholas’s, Rotherfield Greys; St Margaret’s, Harpsden; Hambleden Valley Choir; St John the Baptist, Kidmore End, with Christ the King, Sonning Common; St Thomas’s, Goring, with St Mary’s, Streatley; and Amicorum.

They were conducted by Frances Brewitt-Taylor, director of music at St John the Baptist Church, and David Old was the organist.