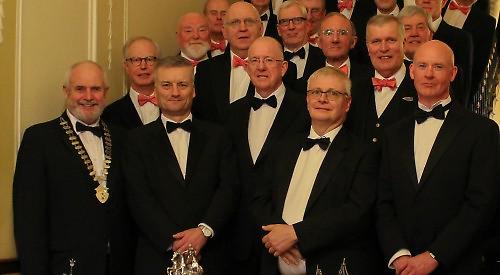 THE celebrations for Leander Club’s bicentenary moved to Dublin with a dinner for the club’s Irish members, writes Robert Treharne Jones.

Eamon Colclough, president of Rowing Ireland, and Charles Flanagan, Ireland’s minister for justice and equality, were among the guests at the dinner at Kildare Street and University Club, attended by more than 60 Leander members.

The event also gave Leander the chance to showcase the Cork International Cups, the trophies which have adorned its dining room back in Henley since the club won them in 1902 and 1903.

The cups were joined at the dinner with the Leander Galleon, a silver trophy which was presented to Cork Regatta by Leander in 1904 and has been competed for ever since.

Although the trophies had been reunited on two previous occasions, this was the first time it had happened on Irish soil. Leander president Jeremy Randall said: “Given our historical support in Dublin, notably from University College and Trinity College, I should not have been surprised at the magnificent welcome that awaited us at the first of our dinners around the globe celebrating Leander’s bicentenary.

“The sight of the three magnificent Cork Trophies reunited in the presence of so many members and guests is one that I shall never forget.”

Dublin-based member John Aiken, who orgaised the dinner with Leander general manager Paul Budd, said: “It simply exploded into a wonderful day and night in the company of such warm and welcoming friends. Without doubt, the Cork Cups made it a unique and historic event. My thanks go to everyone who contributed to our success.”