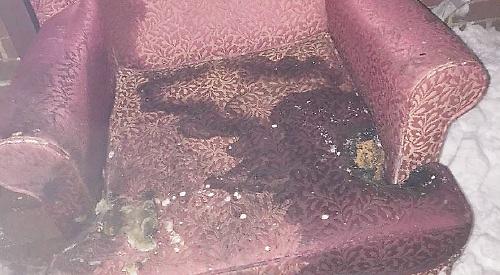 AN elderly man was rescued from his flat in Watlington by firefighters after a blaze started by a cigarette.

Crews from Watlington, Wallingford and High Wycombe were called to the first floor property at a sheltered housing block in Orchard Walk at 10.05pm on Friday.

The man was trapped inside the smoke-filled flat despite the efforts of a neighbour who had gone in and tried to tackle the fire with a can of water.

Firefighters with breathing apparatus rescued the man before going back inside the flat to tackle the fire, which was in an armchair.

The man was treated at the scene by paramedics and was able to return to the flat after it had been ventilated.

Station manager Andy Ford said: “The quick action of the neighbour and the fire crews entering the flat saved the elderly gentleman from serious harm.

“The fire was caused by a cigarette dropping down the side of the armchair and setting light to the cushion, which produced a lot of thick black smoke that spread throughout the flat.

“Fortunately, the property had working smoke detectors, which set off the alarm and the warden called 999.”