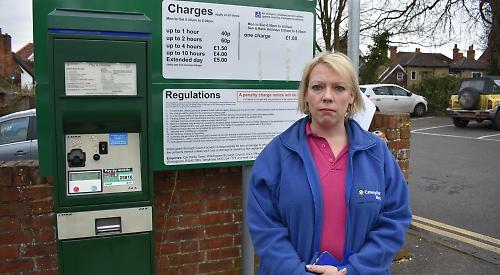 DRIVERS in Wargrave have received fines due to confusion over new parking charges in the village.

Wokingham Borough Council has agreed to increase the hourly rate at its car park in School Lane from 40p to 50p from April 2 on a year’s trial.

The charges will be in operation from 8am to 6pm Monday to Saturday but the £1 fee charged at all other times, including Sundays and bank holidays, will be scrapped.

However, borough councillors John Halsall and Bob Pitts informed some residents in correspondence that the new system came into force on March 1, a month too early.

The councillors, who represent the Remenham, Wargrave and Ruscombe ward, also included the incorrect date in their regular column in the Wargrave parish newsletter.

As a result, some drivers used the car park after 6pm thinking it would be free only to receive fines for failing to pay the correct charge.

Chez Annetts, of Kings Acre, Wargrave, was issued with a ticket on Tuesday, March 6 while attending a meeting of the Wargrave Youth Theatre group, which she runs.

She said she had seen the councilors’ announcement in the Wargrave News and assumed she would only have to pay to park until 6pm.

Ms Annetts, who also runs Caterpillar Music, a weekly singing and dancing group for children, said: “There was a page from the borough councillors and part of it said they were delighted that the parking charges were being revoked and it would be free to park after 6pm.

“On Tuesdays I run a drama club and I had enough change at the car park to pay up to 7.30pm. I would usually pay until 8pm, when I finish, but thought I wouldn’t need to.

“I park there every Tuesday evening and have always paid the correct amount. I only didn’t pay this time because of the councillors’ announcement.”

Ms Annetts said she returned after 8pm to find the ticket on her car so she contacted Cllr Halsall, who said he would attempt to have the fine rescinded.

She said: “I emailed Cllr Halsall to query it and he said he was really sorry and would see if he could sort it. Then on Thursday last week I had an email to say he had looked into it and there was nothing he could do.

“Cllr Halsall is mortified and accepts that he made a mistake but. mistake or otherwise, I don’t think I should have to pay.

“I was parking there in good faith and I haven’t done anything wrong. I would have paid more if I knew I needed to.”

Ms Annetts said she had been contacted by Councillor Keith Baker, executive member for highways and transport, who said he would look into the issue but couldn’t promise the fine would be rescinded.

The fines are issued by an enforcement company and councillors have no power to overrule them without evidence. Ms Annetts said she had heard of other drivers who had also been caught out, including customers at the Bull pub.

The borough council has told her that the charges are displayed on signs at the car park and these will be changed when the new charges are introduced.

Ms Annetts said: “Despite Cllr Halsall’s official announcement, the council says I should have adhered to the signage, which after my complaint was amended with a small notice on a post.

“The small sign appeared on the Thursday night. It has all the new charges but it’s only on the last page that it says when they are coming in.

“I don’t think it’s fair for me to have to pay the fine.”

In a post on social media, Cllr Halsall said: “There was contradictory advice given after publication which meant that the change in charging would be delayed, now anticipated to be April 2.

“There is still a charge for the School Lane car park for Sundays and night-time. Please pay it as you will be fined if you do not.

“The boards on charges in the car park are the definitive statement on current charges.”

Cllr Halsall said the date for the new parking charges was pushed back at the last minute, by which time the article had already been published.

He said: “Both the executive member and myself are trying to make sure nobody loses out as a consequence. I obviously take responsibility and the people who have made themselves known to me have been compensated.

“I would also point out that the charges sheet and machines at the car park all state that the existing charges still apply.”