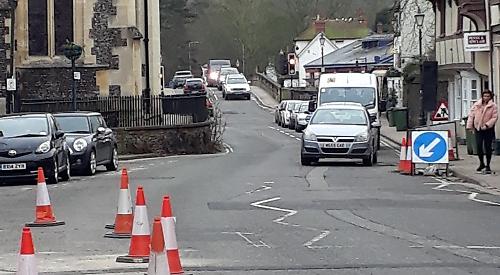 BUSINESS owners in Henley say their trade has been hit by roadworks in the town centre.

One lane of Hart Street has been closed since the end of last month as for Oxfordshire County Council workers refurbish the pelican crossing.

Temporary traffic lights have been put in place, with cones cordoning off part of the road and pavement.

The work was due to be completed today (Friday).

Traders say the roadworks have caused long tailbacks in the town and on the approach via Remenham Hill, putting off shoppers and visitors.

Jack Free, who runs Jack’s Gallery in Hart Street, says his custom has been halved. He said: “The roadworks are directly outside our door and have been going on all last week and this week.

“The workmen are very nice and considerate but it’s right outside and the cones have come right up on to the pavement.

“Coupled with the weather it has had an effect. Footfall has gone down by at least 50 per cent.”

Annette March, who runs the White Gdn florists in Hart Street, said: “We got no notice at all from the council by letter or email that this was going to happen and that’s what upset me.

“When we were delivering for Mother’s Day we had to leave the shop early.”

Joseph Bucsi, who works at Vintage Look in Hart Street, said: “It has been really quiet because everyone has avoided coming in to Henley.

“At the weekend they could have switched the traffic lights off but they didn’t. There’s no reason why the cars couldn’t have driven through.

“Anything like this affects us because there’s no parking for the shop and even the visitor parking is cordoned off.

“We tried to contact the town council about it but they didn’t want to know.”

Gary Owen, who runs IT company Signals in Hart Street, says staff and customers have struggled to make it in to work.

He said: “On Wednesday morning I sat in a queue for 50 minutes.

“The temporary lights are also out of phase with the ones on the bridge. Something as simple as that doesn’t need to happen and my staff are frustrated with it.

“A couple of the staff live in Henley but the rest come from the Reading area and have struggled to get in.

“It’s also embarrassing for us and we’ve had to try to schedule meetings with clients so they don’t see the traffic.

“I’ve worked in Henley for 15 years and seen ups and downs with the traffic.

“It’s a medieval town which is not meant for cars but it’s in the start of a decline. We have reached a point of saturation where five per cent more traffic means 500 per cent more congestion.

“Footfall is in long-term decline because of the traffic issues and the only businesses which are commercially viable are charity shops.”

Some businessess said they hadn’t been affected.

Lawrence Tian, who run the Berries coffee shop in Hart Street, said: “There are a lot of cars but it has not been bad for us.

“Most of the time the door is shut so we don’t smell the fumes and the customers don’t mind.”

Staff at Jonkers Rare Books said they hadn’t noticed any problems but it was traditionally a quiet time of year for them anyway.

Town manager Helen Barnett said businesses should have been notified.

She added: “There’s the belief that Henley is closed because we are always digging it up and we need to alleviate that for our businesses.”