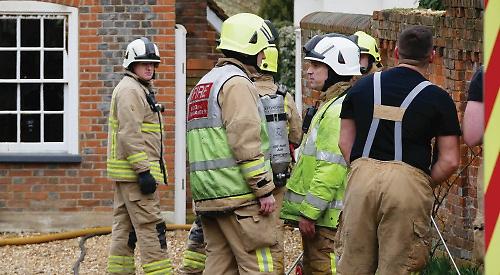 A COTTAGE in the centre of Wargrave was gutted in a fire.

The blaze affected both floors of Holly Cottage in High Street, which is Grade II listed.

Firefighters were called to the empty property at about 9.25am on Friday.

The alarm was raised by neighbours who saw big plumes of smoke coming from the cottage. The fire could also be smelt further down the street.

Lucy Fulford, who lives in the village, said: “The fire must have started before 8.45am because my house had a smell of smoke inside at that time.

“I didn’t actually go outside until a while later. By that time High Street was closed, with six fire engines from three different fire services, an ambulance and several police cars all parked along the street. A police cordon at both ends of High Street was stopping traffic from passing through. Neighbours were having a look but no one I spoke to had seen the fire break out, so I don’t know who raised the alarm.

“Firefighters were moving in and out of the ground floor of the cottage, which appeared entirely burnt out, with the crews pushing charred, crumbling material out of their way. The upper floor also looked totally gutted, with blacked out walls. Firemen, police and forensics were together examining the perimeter of the property.

“Later a police community support officer was knocking on doors asking if anyone had seen or heard anything suspicious that morning.” Christabel Grimmer, who lives in High Street, said: “I woke up to five fire engines and smoke coming out of the cottage.

“The owners have had it a relatively short time and the people who had it before them did a super job of doing it up.

“The fire brigade came again on Saturday morning to check my fire alarms and said the cottage was gutted.”

A 20m long section of the street was cordoned off by police during the incident, with traffic redirected via Wargrave Hill, Lane, Dark Lane and School Lane.

Pedestrians were redirected around the cordon as police forensics teams inspected the building. The road was re-opened at about 2pm.

Fire crews remained on the scene for about four hours.

They said the property had suffered severe fire and smoke damage. The lounge and a bedroom above it are thought to have been the most badly damaged.

It is not known how the fire started as the owners were not in at the time.

The ground floor windows at the property have beeen boarded up and much of the burnt material from inside has been brought outside on to the driveway.