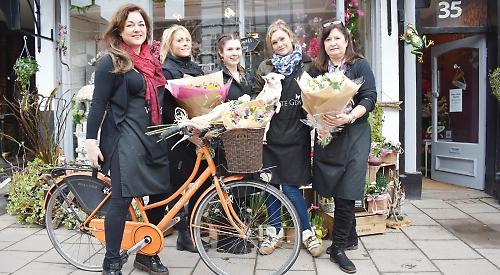 WHEN you sell flowers for a living, it makes sense to try to look after the environment.

But one Henley florist shop has come up with a novel way to cut its carbon footprint after starting to deliver bouquets by bicycle.

Staff from White Gdn in Hart Street can now be seen astride a bright orange bicycle on their way to and from deliveries in town, although the business still uses its van to reach customers further afield.

Owner Annette March said: “It reduces our carbon footprint if we don’t take the van out when we don’t need to. Pollution in Henley is high as it is so every little helps. Parking is also limited so that’s another benefit to using the bike as well as allowing the staff to get some exercise!

“A few of the staff already ride in to work because it’s more convenient.”

The bike is a Holland model without gears and has a basket to carry packages.

Annette said: “It’s a nice vintage bike. It gets quite a lot of attention when we go around town on it. It reminds people of what traditional florists are all about.”

Deborah Coates, a member of staff who owns the bike, says it is something of a “boneshaker”. It was bought for her by her late father Peter 10 years ago when she lived in Italy and she had it shipped over when she moved back to the UK.

Deborah said: “In Italy a lot of people ride bikes and I think there there needs to be more cycle lanes here — we are not bike friendly.”

She came up with the idea of delivering bouquets on her bike to reduce the shop’s carbon footprint.

She said: “By the time you’ve got in the car and started the engine you could have gone round the corner.

“Using the bike seems a lot more logical and you can go down the towpath all the way to Marsh Meadows rather than sitting in traffic for 10 minutes waiting to go over the bridge.

“People look and smile when they see me and it’s invigorating to be on the bike as you get fresh air.”

Other members of staff, including Sheila Murphy, have done deliveries on their own bikes.

Annette said: “We’ve had vans beeping their horns at us when we are out on the bikes and everyone has appreciated it for sure!”

Deborah said she might even customise the bike’s basket with White Gdn branding, although the bodywork is too valuable to touch.

She said: “It’s a very special bike. You won’t find one like it in the UK.”