Henley is crime hot spot (at least for Midsomer fans) 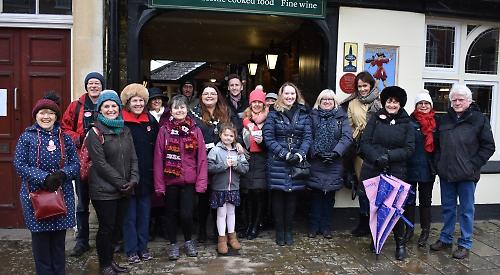 THE first of 30 tours of Henley based on locations used for the filming of Midsomer Murders took place on Saturday.

The tour is run every weekend by Henley Hosts to highlight the parts of town that have featured in the ITV crime drama series.

There will now be one every week until the end of October, except during Henley Royal Regatta week. The tours were started three years ago and are particularly popular with tourists from America, Canada, Australia and northern Europe.

The tour guides are Sarah Osborne, Graham Horn, Debbie Keenan, Bobbie Latter and Anthea Osborn-Jones, who all live in Henley or nearby.

Each tour begins at the Argyll pub in Market Place, which featured in the episode Last Year’s Model, which aired in 2006.

Mayor Kellie Hinton, who was among the 20 people on the first of this season’s tours, said: “This year is the 21st anniversary of Midsomer Murders on television.

“We value it because it brings coachloads of people into the town, which is really good for our economy. I don’t think people realise how much of the town has been used. I know the rugby club, the Argyll and the town hall have all been.”