Bridge lights artist could be prosecuted 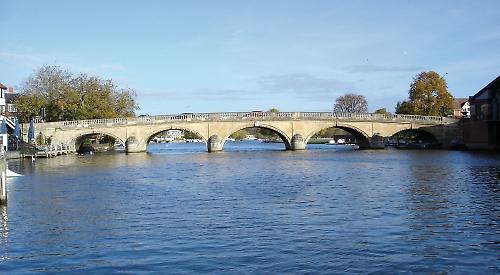 AN artist could be prosecuted for installing lights on Henley Bridge without permission.

South Oxfordshire District Council, the planning authority, is considering taking legal action against Clive Hemsley after he stuck two strings of 800 white LED bulbs to the Grade I listed structure.

Mr Hemsley, of Hart Street, carried out the work at the end of last month and has since been ordered to remove the illuminations by Oxfordshire County Council, which is responsible for the 18th-century crossing.

The reaction from residents has been largely positive and more than 2,000 people have signed a petition urging the county council to keep the lights in place.

But the district council says Mr Hemsley has committed a criminal offence and it might take him to court if the work has damaged the bridge’s fabric.

He installed the lights during the last week of February from a barge supplied and crewed free of charge by Hobbs of Henley. He
held the lights in place with duct tape then secured them with Gripfill, a type of “grab adhesive” made with rubber that builders use to mount items on tough materials such brick, stone and metal.

Mr Hemsley says he first tested it on several pieces of stonework then applied it to the mortar on the bridge, not its historic Hamstone. He says it can be easily removed with a solvent provided by the manufacturer and it won’t cause damage.

He says the lights can’t be taken down yet because the river is still flowing too high and fast after this month’s heavy snowfall but he is happy to do so when it is safe.

He said: “I’m liaising with the manufacturer’s technical department and sharing the details with the district council but I’m confident that I used the right glue for the job.

“I’m actually amazed that it stuck because it isn’t supposed to work below 5C and it’s questionable whether it was any warmer than that on the days we were working.

“I tried the glue on a few bits of Hamstone beforehand and was able to take it off again so I’m happy that there won’t be any damage whatsoever.”

In an email to councillors, the district council’s enforcement team leader Emma Turner said: “The focus of our investigation is the effect the materials have had on the stonework.

“We hope that prosecuting the people involved will not be necessary but it remains an option pending the outcome.

“We are gathering the details of how the work was carried out... once we have this information we can assess how the lights can be removed without causing damage to the stonework.

“We will also review our positions regarding any formal action against the perpetrators.

“We understand that there is a lot of public support for the lights. Officers from both councils support the principle of lighting Henley Bridge and would welcome the opportunity to advise the town and county council on suitable alternatives.

“This is a great opportunity for all parties concerned to work together and turn this situation into something really positive for Henley and its residents.”

Mr Hemsley hopes to arrange a meeting with both councils to discuss submitting a retrospective planning application.

He said: “There’s a significant amount of people power behind this and I think the councils are being quite gentle because they know how popular the lights are.

“I’m sure they’d rather deal with one planning application from me and not all 2,000 supporters.”

Henley Town Council is to debate whether it supports the principle of lighting the bridge at a meeting on Tuesday.

Mayor Kellie Hinton, who has said she supports the lights, said: “We’ve never seen a petition reach 2,000 signatures in such a short space of time so there’s significant public interest in the issue and we need to decide where we stand.

“At the end of the day we can’t support those specific lights because they’re unlawful but it’s shown that we ought to debate something more permanent.”

The county council says it would welcome a lighting trial if the methods were agreed in advance and the town and district councils supported it.