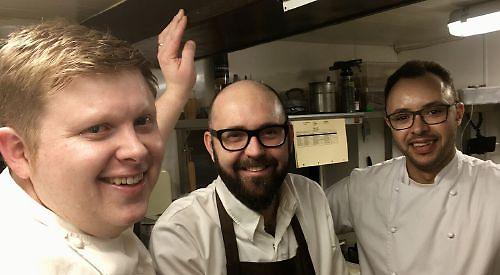 He was the first in a series of guest chefs to appear at Orwells, which is run by Ryan and Liam Simpson-Trotman.

Bainbridge won the 10th series of BBC 2’s Great British Menu in 2015 and is the only chef to ever have two dishes in the final banquet of the competition.

He was also a judge on last year’s series in which Mr (Ryan) Simpson-Trotman was a competitor.

At Orwells, Bainbridge cooked the dishes which won him the show: Norfolk lamb with Jerusalem artichoke, truffle and parsley sponge followed by Nanny Bush’s trifle with milk jam.

The hosts cooked fish and chips and Hereford beef, potato, carrot and roscoff for the dozens of diners.

The next guest chef will be Hywel Griffith, head chef of the award-winning Beach House in Swansea, who will visit on Thursday, April 19.

Orwells will be making its own Easter eggs for every guest who visits the restaurant on Easter Sunday.

Each one will contain a prize including tasting menus, wine tasting and money off meals.