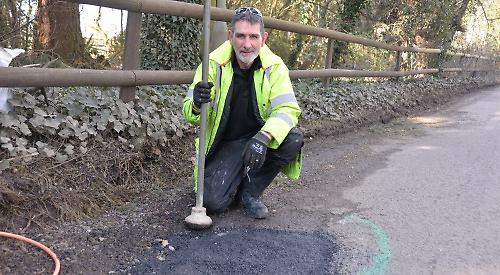 A COUNCILLOR has been fixing potholes around Henley after becoming fed up with the state of the town’s roads.

David Eggleton bought bags of aggregate to fill the holes in Gillotts Lane, on the Gainsborough estate and in Shiplake, before using a blowtorch to cover them with Tarmac.

He said many had been reported on the Fix My Street website, but no action taken.

Roads in and around Henley have deteriorated rapidly after a hard winter and the recent snowfall from the “beast from the east”.

This week the Henley Standard revealed that roads in and around the town would get worse because there isn’t enough funding to maintain them properly.

Councillor Kevin Bulmer, who represents Goring on Oxfordshire County Council, the highways authority, said roads are deteriorating faster than defects such as potholes can be repaired.

Councillor Eggleton, who lives on Gainsborough Road, said: ““This year has been particularly bad for really deep potholes, but they don’t need to get to this state where they need to dig up half a road to fix one.

“A lot of these potholes have been reported. They come out and put a little line around it and two weeks later it’s still there.

“They come out and do a thin film which lasts a couple of weeks and we’re back to square one and people are complaining again.

“We don’t want this extra expense of having to fix our cars. It’s all the inconvenience of it, taking time off work or having to spend hours waiting for the RAC to come and take you home. Some of these are in remote spots.”

Cllr Eggleton said he had been contacted by several residents asking him to help.