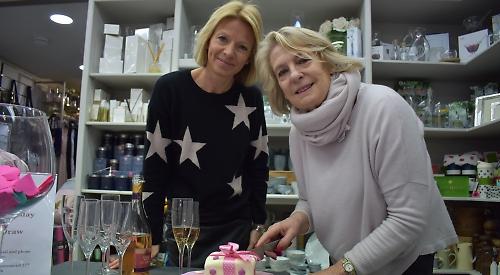 A GIFT, homeware and clothing store in Henley has celebrated its first birthday,

Sandie Russell and her daughter-in-law Lise Harrow, who opened Stock at the former Chilton Watson opticians premises in Bell Street, welcomed guests with glasses of fizz and a birthday cake on Tuesday.

There was also a raffle with prizes donated by their suppliers.

Mrs Russell said: “We’re extremely pleased with our first year. We’re very grateful to all of our customers who have given us the most amazing start and it’s their general support and enthusiasm and the way we have been received that we’re really thankful for.

“The encouragement we have had from our customers has just been marvellous.”

Mrs Harrow added: “We think independents are very important in a town centre. It adds to the town as a whole and makes it more interesting.”

The shop sells a range of goods including glassware, cushions, greetings cards, picture frames and candles by Charles Farris, which are one of the Queen’s favourite brands, as well as women’s tops and cashmere sweaters for men and women.

Mrs Russell, who lives in Bell Street with her husband Christopher, used to run similar shops in Cambridge but has been working as an interior designer since 2004. The couple moved to the town about eight years ago.

Mrs Harrow, who is originally from Denmark, is married to Mrs Russell’s son Rupert Harrow and returned to the UK after spending 16 years in Hong Kong, where she ran a number of businesses.