Pupils celebrate the importance of reading 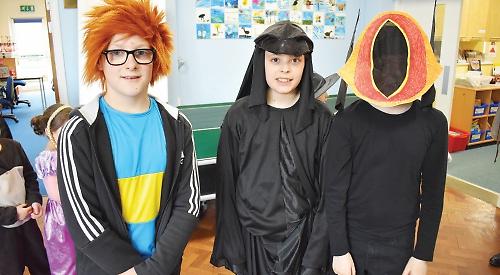 They were also visited by an author and held a book fair.

The event was instead of celebrating World Book Day on March 1, when the school was closed due to snow.

The pupils came to school dressed as characters including Sauron from Lord of the Rings and Charlie Bucket from Charlie and the Chocolate Factory as well as superheroes, witches, princesses, pirates and animals.

Elizabeth McDonald, reader development officer for Wokingham borough libraries, read stories to the children and author Hannah Skaanild, whose daughters Annie and Ruby attend the school, read them her book Cat Wants Wings. Proceeds from sales of the book went to the Millie’s Dream, a Henley charity which installs defibrillators at schools and community centres in the area.

The fair included a book swap and an extreme reading challenge, for which the children brought in pictures of themselves reading in unusual places.

Headteacher Philippa Chan said: “We decided to do a week because we felt just dressing up on one day wouldn’t impact on attitudes towards reading.

“There were some very creative costumes and the staff dressed up as well. It really brought the community together and had a lovely feel.”