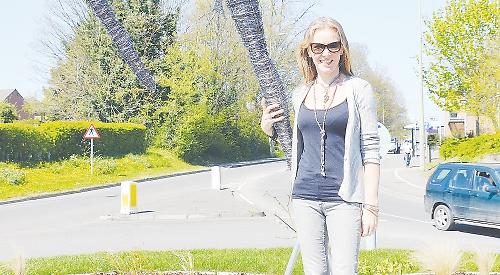 THE 7ft high “leaping lady” sculpture at an entrance to Henley has been vandalised for the third time in two years.

The arms and a leg of the £7,000 metal figure have been bent out of shape so that it bears little resemblance to how it looked when it was installed three years ago.

The sculpture, which was made by artist Rachel Ducker for a Henley in Bloom competition, depicts a woman appearing to leap out of water and is the centrepiece of the roundabout in Reading Road by the entrance to Tesco.

It is meant to represent Henley as a gateway to a healthy lifestyle.

Mayor Kellie Hinton, who chaired the Henley in Bloom committee at the time of the installation, said: “Unfortunately, these silly things happen, these pointless acts of vandalism — we saw it recently with the mermaid at Red Lion Lawn going for an unplanned swim.

“Parks services recognised it. They were happy to deal with it but felt the artist should be told first. Luckily, we chose a local artist who can fix it quite quickly.

“I don’t think the vandalism was done because people don’t like it — people have got quite used to her. We need this creativity in our town to breed other creativity.

“Perhaps it’s somebody who had a few too many one evening or maybe someone who likes to be nasty to other people.

“It’s pointless, stupid and, quite frankly, if they haven’t got anything better to do with their time then I feel sorry for them.” In November the 6ft 6in bronze mermaid statue on Red Lion Lawn was thrown into the river by vandals, although it was recovered later.

“I think we need to push for a bigger police presence,” she said. “Unfortunately, unlike the mermaid, which is extraordinarily heavy, this work of art is obviously easier to vandalise.”

In April 2016 vandals were believed to have been responsible for damaging the bright red hair on the sculpture.

When it was installed the hair was pointing upwards but was re-arranged in the opposite direction with the strands meshed together.

Former mayor Elizabeth Hodgkin, who maintains the roundabout with the Gardening Buddies, said: “When it was first put up people started fiddling with the hair but gradually it has got worse.

“It’s probably very easy for people to do as the figure is very accessible. It has got so bad now she needs to be pushed back into shape properly.

“It’s annoying when people do things like this, it’s just silly.”

The woman’s body is made of galvanised, annealed steel and her hair is enamelled aluminium so the metal changes colour as it ages.

The figure was the final piece of a design created by competition winner Paul Terroni which also features five flower beds made from interlocking rings.