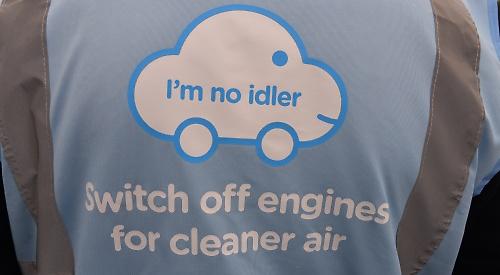 THE introduction of 20mph zone in central Henley is a step closer.

Town councillors have agreed to spend £2,600 on an application for a traffic regulation order by Oxfordshire County Council, the highways authority, to get the project started.

The implementation of the zone would cost another £16,500, mainly to install signage.

The zone would be from the Marlow Road/Bell Street roundabouts and include New Street, River Side, Thames Side and Station Road to the traffic lights.

The zone is one of a number of proposed measures designed to improve air quality in the town centre, where levels of nitrogen dioxide in some streets are 50 per cent higher than Air Quality England’s target limit of 40 micrograms per cubic metre.

The council’s town and community committee also agreed to give £1,000 towards a “no idling” campaign to persuade drivers to switch off their engines when their vehicle is stationary.

A pair of planters containing elaeagnus ebbingei, a tough evergreen, will be placed in Duke Street for a two-week trial period in an attempt to reduce nitrogen dioxide and particulates from vehicle exhausts.

Miles Watson-Smyth, of WindowFlowers, has offered the council the two planters for the price of one at £485.

The council’s transport strategy group wants to eventually place plant troughs along Duke Street, Bell Street and Greys Road and to plant up to 10 trees in Hart Street. This could cost up to £20,000.

Councillor Stefan Gawrysiak, who chairs the group, told the committee that a 20mph zone would improve air quality.

He added: “If we want any measures in Henley it will be Henley Town Council paying for it.” Councillor David Nimmo Smith said he believed that residents wanted the zone but the council had to ensure it pursued the initiative after paying for the traffic order.

The “no idling” campaign is being led by the environmental campaign group Henley in Transition, which has raised £600 and is appealing for more funds.

David Dickie, a member of the group, said they wanted to work with schools to encourage parents to switch off their engines as well talking to pupils about the initiative.

The group has produced pamphlets, car stickers and a snakes and ladders game for children and members will speak to drivers in town car parks. Mr Dickie said: “We want to get people to stop sitting with their engines on.

“People are very willing to do it once you ask them politely and that’s the skill you have got to have.”

He said the campaign would run throughout the year but November, December and January were particularly bad for particulate levels.

Councillor Sam Evans suggested going out at specific times of the day to speak to different groups of drivers, such as those on the school run, those going and to and from work and shoppers.

Cllr Gawrysiak added: “Education and information is the first stage of this.”

The transport strategy group is considering a number of other measures to improve air quality, including a car club, electric car charging points and a 12-month particulate monitoring project using sensors.

It also wants three new cycling routes, a new walking map of Henley to encourage people to explore the town on foot and signage for the car parks at Henley Rugby Club and the station.