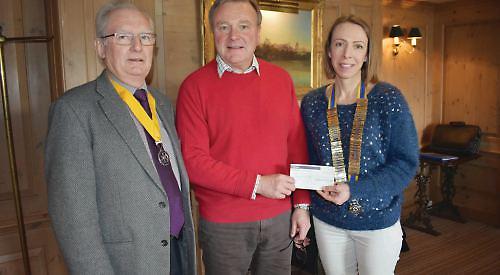 The club presented a cheque to Kamuli Friends, a charity which is refurbishing a ward at the Kamuli Mission Hospital in Uganda, at a dinner at the Red Lion Hotel in Hart Street.

Dr Philip Unwin, who is a GP at the Hart Surgery, founded the Friends in 2012.

Since then, the project has built new nurses’ accommodation and added a guest house and covered walkway. It has also set up a scheme in which doctors and nurses can volunteer to help at the hospital for up to six months.

The Rotarians raised the money at a charity auction at the hotel in February. The auction made £2,000, half of which will be donated to the Thames Valley Air Ambulance. Another £500 was added to the Kamuli donation from another Rotary fund.

Dr Unwin said: “Currently we are rebuilding the doctor and visitor accommodation. We are trying to raise £200,000 and this is another piece of the jigsaw.”

He is pictured (centre) with Barry Prior, chairman of Henley Rotary Club’s international committee, and president Maria Bunina