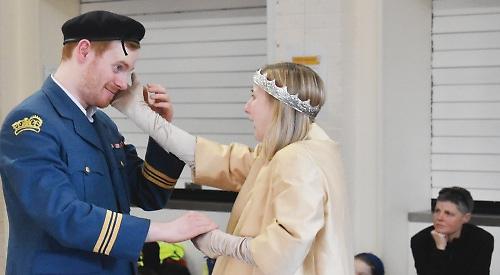 CHILDREN from three Henley schools took part in a performance of The Tempest by William Shakespeare.

Actors from the Young Shakespeare Company visited Rupert House School in Bell Street and performed the comedy to pupils from the school and nearby Badgemore and Valley Road primaries.

Children contributed by acting out the storm which wrecked protagonist Prospero’s boat, while others were chosen to take on small roles such as court guards.

Sarah Williams, deputy headteacher of Rupert House School, said: “We thoroughly enjoyed Shakespeare’s tale of magic, comedy and drama in the fast-moving, costumed promenade-style production. The play was brought vividly to life around the children.”

Head girl Jemima Brewer said: “I liked how we were all included.”

Dewi Sarginson, of the Young Shakespeare Company, who played Miranda and Ariel in the play, said: ““It was lovely to perform here. The company does 800 shows a year around the country, performing for six- to 16-year-olds.

“We try to make Shakespeare more accessible to children and go to places like the Midlands and Yorkshire where the children find it harder to see those shows.

We have done it for a range of schools and it’s interesting to see the different dynamics. They always bring a different energy, which keeps us on our toes.”