Volunteers save thousands of amphibians 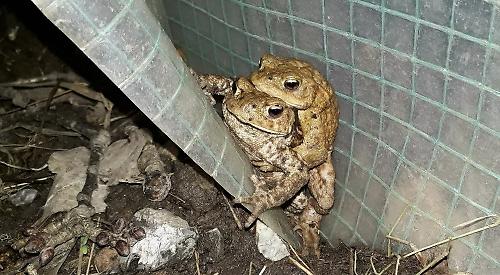 MORE than 7,300 toads, frogs and newts were rescued from death on a busy Henley road by volunteers.

Each year, the volunteers erect a barrier in Oaken Grove Wood, which belongs to the Culden Faw estate.

When the creatures arrive at the barrier they are placed in buckets and carried across the road. The barriers were removed on Thursday last week by which time a total of 6,144 toads, 682 frogs and a record 552 smooth newts had been helped across the road in the space of a few weeks. This compard with last year’s total of 7,798 toads, 1,072 frogs and 236 newts.

The operation had to be postponed during cold weather in February and March as the creatures only move at night when the temperature is at least 7C.

Roadside banners and batteries were donated by Henley marketing company Screaming Frog and Nicola Taylor of Lawlor’s bakery, while the group also started its own Facebook and Twitter pages.

Organiser Angelina Jones said: “This has not only generated a lot of positive interest in the plight of migrating amphibians but has also seen a huge increase in new adult volunteers coming forward to join the group.”

Anyone who wants to take part in next year’s patrol should email Mrs Jones at amtjones@googlemail.com