New beer made to mark Harry and Meghan’s big day 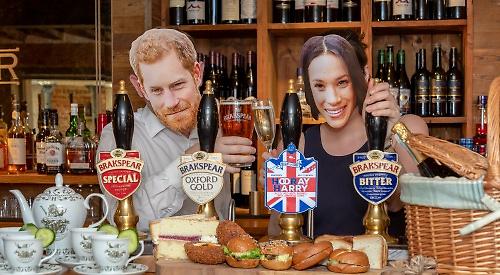 PUBS in the Henley area are serving a special beer brewed to commemorate the royal wedding.

Hooray Harry is a 4.1 per cent ale brewed at Brakspear’s Bell Street brewery and made with British and American hops.

Head brewer Malcolm Mayo said: “We wanted to mark this special occasion with a beer that offers all the traditional British-ness of a royal wedding as well as giving a nod to Ms Markle’s American heritage. We think Hooray Harry combines these elements perfectly and, like its royal namesake, has plenty of character.

“We’re all looking forward to raising a glass of it to the happy couple on May 19. We’re not aware of any other beers named specifically after the groom, so we have put aside a firkin for Prince Harry to enjoy at his stag do, or at the wedding itself and as Windsor is just down the road, we’re happy to drop it off.”

The limited edition beer is being served at the Angel on the Bridge, the Bull on Bell Street, the Little Angel and the Row Barge in Henley as well the Maltsters Arms in Rotherfield Greys, the Bull at Wargrave, the Hare & Hounds in Sonning Common, the New Inn in Kidmore End and the Reformation in Gallowstree Common.

The Bull and and the Little Angel are also offering any couple called Meghan and Harry or Henry and Rachel getting married on the same day an overnight stay and dinner. John Thirlway, general manager of the Little Angel, said: “The first five couples to contact us and bring in their marriage certificate to one of the pubs will receive a bottle of fizz.”