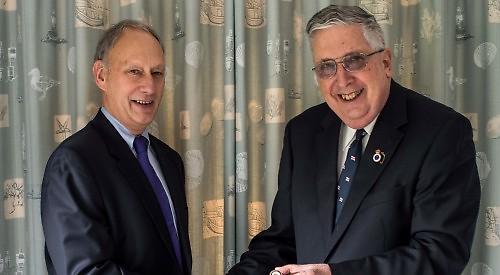 A WARGRAVE man has been honoured for serving 25 years as chairman of the village branch of the Royal National Lifeboat Institution.

Michael Porter, 79, of Station Road, was presented with an excellence in volunteering award by the charity’s operations director George Rawlinson at the branch’s annual meeting on April 6.

He joined the RNLI more than 35 years ago and was awarded a gold badge — the highest award for land-based volunteers — in 2013.

Mr Porter has stood down as chairman to become the branch’s president and has been succeeded by Paul Blair. Mr Porter said: “Being president means I’m still sort of the figurehead for the organisation and I’m still known in the village as ‘Mr RNLI’ but Paul is really getting stuck in and I’m sure he’ll do a great job.”

Branch members Jonathan Paddison, Cameron Floate and Chris Kaye were also honoured for fund-raising over a combined total of 50 years.

The branch raised more than £11,000 during 2017, a 17 per cent increase on the previous year. This year’s events include water safety awareness presentations at the village’s rag regatta in June.