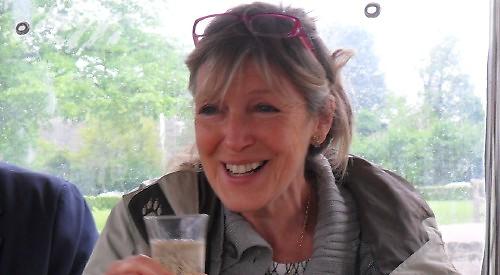 SHE is more used to bucket collections and poppy sales but one member of the Henley and Peppard branch of the Royal British Legion will be raising money in a very different way next month — by jumping out of a plane at 14,000ft.

Mollie Jeffrey, who took over as branch membership secretary last year, will be making a skydive at Old Sarum Airfield in Salisbury on Tuesday.

She was persuaded to try skydiving after talking to a paratrooper at the launch of last year’s Poppy Appeal in Henley.

Mrs Jeffrey, who lives in Harpsden, says: “He was so enthusiastic about how exciting it is.

“Somehow I convinced myself that it would be terrific to leap out of a plane in tandem with a handsome Red Devil.

“I also want to raise awareness of the British Legion in Henley and try to convey that it’s for a much broader group than just people in the military.”

Mrs Jeffrey, whose father was in the RAF, will be strapped to an instructor for the jump.

She said: “At the moment I’m thinking ‘what have I done?’ I know it’s going to be really exciting but I’m terrified of the moment when I have to exit the plane. You freefall thousands of feet and I’m hoping that I’m going to be very dignified and not scream all the way down!

“It’s something of a departure for me. I cycle in London, which is brave, and cycle in Henley, which is even braver, but I’m afraid of this!

“But however terrifying the prospect, now that I’m all booked in there’s no going back. I’m thrilled with the support and generosity of everyone sponsoring me.”

Last year, fellow branch members Stan Ainsley, John Green and David Lees made more than £1,600 by taking part in the 100th annual Four Day March in Nijmegen in the Netherlands.