Connie’s too hot to handle! 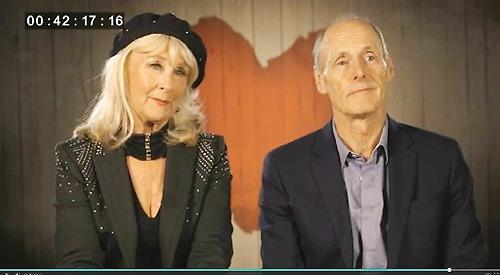 SPARKS failed to fly when a Henley woman who has been single for 13 years appeared on TV’s First Dates.

Connie Butt says she was paired with a “boring” man who didn’t “light her candle” for an episode of the Channel 4 matchmaking show, which was broadcast on Wednesday night.

The 75-year-old, of River Terrace, shared dinner at the Paternoster Chop House in London with Gray, a 72-year-old jive dance instructor from Sevenoaks.

The pair, who were recorded by hidden cameras, struggled to find any common interests and Mrs Butt was stunned to hear her potential suitor didn’t have a “bucket list” of goals he wished to accomplish.

Gray was dismayed to learn that she smoked and lectured her on her habit after she declined to meet for a second date.

Despite the disappointing result, she says she would consider returning to the show.

Mrs Butt, who manages the Henley 60-Plus Club in Greys Road car park and has collected for the Henley Poppy Appeal for more than 25 years, was put forward by her daughter Samantha Thirlby-Smith.

She attended a series of interviews and was eventually invited to attend a date at two weeks’ notice in September.

She had hoped to take part in First Dates Hotel, a spin-off show in which contestants enjoy a three-day holiday in Europe, but was not selected.

Mrs Butt arrived at the restaurant near St Paul’s Cathedral wearing a sparkling black top with a matching jacket, choker, beret, sunglasses and heels while her date arrived in smart-casual attire with a flat cap and riding a pedal scooter. In an introductory video set to What’s New Pussycat? by Tom Jones, she said: “I come over as very flamboyant and sometimes loud and I think this has been the problem — men think I’ll be a big handful. I’m just too hot to handle.

“I’m known as a dresser and look better dressed than undressed. There was a time when I looked better undressed, but not any more!

“I haven’t given in to my age quite yet — I know I’m getting older but I don’t feel much older than 64 or even 29, and any man I meet needs to feel the same.”

She joked to the camera crew: “If I start to lose my teeth, you can cut away while I glue them back in!”

The dates appeared to strike up a rapport when Gray said he had visited Henley in his cabin cruiser and it was a “lovely” place.

However, when he told Mrs Butt about his job she said: “I’m a good jiver — it’s all in the arms” and he flatly replied: “No, no it’s not.”

He said he had been married for 28 years but his wife left him, adding: “It was a shock at the time because I was completely unable to see it coming, which you may well say was part of the problem.”

Mrs Butt said she was married for 24 years before leaving her husband in the Eighties and had been single since a subsequent partner took his own life while they were living in France in 2005. She said: “It took a long time after my partner died to actually think about meeting anyone but now I’d just like somebody to give me that bit of sparkle that’s been missing.”

Mrs Butt asked Gray about his bucket list and he replied: “I don’t agree with them. There’s nothing I particularly want to do and no particular place that I would like to visit.”

The pair then sat eating in silence. When she announced that she was going outside for a cigarette, Gray said: “My parents smoked and I hated the smell of cigarette smoke.”

She then ordered an espresso while he asked for a decaffeinated coffee.

Mrs Butt pulled a face and told him: “You’re not living!”

He replied: “I just don’t feel the need to do all these daredevil things.”

Afterwards, she told him: “I think you’re a very nice guy but you’re not for me. You didn’t really light my candle.”

Gray said: “Right, okay. I didn’t know you had a candle but there you go.”

He added: “You should give up smoking, not only for your future relationships but also for your health.” Mrs Butt told the Henley Standard: “It was a no-go. I think I might have seemed a bit pushy because he didn’t seem to want to do anything I suggested. There was just no connection.

“The producers rang me and said they’d found the perfect match for me but they obviously had no idea. I said I’d do it because I’d been waiting since May but I should really have held out for someone with a bit of a spark.”

In one exchange which wasn’t shown, she asked Gray about his hobbies and he said he had given up tennis as he was “too old”.

She said: “I asked ‘well, what do you do then?’ and he said, ‘well, nothing really’. I told him I play all sorts of things like golf, chess and bridge but he couldn’t come back with anything.

“In fairness, almost everyone who meets me tells me not to smoke. But I’m 75 — am I going to worry about something I’ve been doing since I was 19?

“The only downside is that my voice is now too low to be an effective singer, unless it’s Ol’ Man River!”

She said Gray wanted to meet again but she didn’t. She said: “He was nice but I don’t know what he was doing on the programme as he was so dull.

“I’d told the show to find me someone dapper as I don’t care about looks.

“It doesn’t matter if they’re too short, tall, thin or whatever, but they’ve got to be fun and there he was in his Fair Isle and flannels while I was dressed in my sparkle and beret.”

Mrs Butt said she had never watched First Dates and would not have considered applying herself. However, she said some contestants had been invited back and she might accept if it was offered.

She said: “I don’t hold out much hope but we’ll see what happens. I would ask whether they were sure it was a good match and whether it was going to be something fun like the hotel, otherwise I probably wouldn’t bother.

“It’s down to chance whether you meet someone at any stage of your life but I’ve been single for almost 14 years and if you don’t get out there you’ll never meet anyone.

“Most of my friends are married couples and I’ve had a few younger men coming after me but I don’t want to go down that route. I just like to go out and have a good time with friends, whatever their age.

“Everyone in Henley knew I was going to be on television and when someone came into the club looking for people to appear on Gogglebox, everyone pointed at me.

“I haven’t got back in touch with them, though. I imagine my daughter and I would end up having screaming matches and having people filming in your house isn’t as easy as it sounds.”