Happiness is... thinking of others 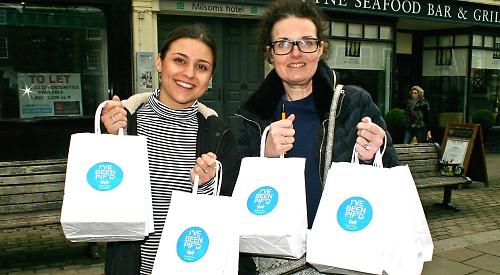 They gathered in Market Place to launch the initiative as part of international Pay It Forward Day on Friday.

Pupils from Badgemore Primary School handed out bags of cakes and biscuits they had baked themselves to passers-by and gave out stickers saying: “I’ve been PIF’d”.

Everyone who received an act of kindness was encouraged to perform a similar gesture for somebody else and, in turn, encourage the recipient to “pay it forward” in order to create a ripple effect.

The event was organised by Suzanne Morley, who lives in Market Place, and Geoff Hocking, managing director of Station Road marketing consultancy Breathe Creative, which designed a Happy Henley logo.

Mrs Morley said: “Acts of kindness are performed by all of us every day but today we can mindfully choose to do something kind that we wouldn’t otherwise do as we rush about our daily lives.

“Pay It Forward gives us a chance to experience the benefit of connecting with someone in our community and sharing a moment of happiness through social interaction and kindness.

“The sum of these moments can contribute to community wellbeing and support.” Tim Hoskins, deputy headteacher at Badgemore, said: “Happy Henley shares a lot of values with our school and we wanted to get involved.

“The children have really enjoyed baking their cakes and seeing the difference they can make in the wider community.

“It sets a great example as it proves you can benefit as much from giving as you can from taking. It’s the kind of behaviour we hope they will go on to demonstrate throughout their lives.”

Town manager Helen Barnett said: “This has been a real team effort and it’s such a fantastic thing for Henley to be more positive. People should be kind anyway, of course, but this really focuses the mind on it.

“It’s great that so many people have wanted to be involved as it’s good to be jolly and happy.”

Mr Hocking said: “I’m just amazed at the amount of support we’ve enjoyed, particularly as it’s only the first of what will hopefully be many Happy Henleys.” For her act of kindness, the Mayor and her daughter Hallie, seven, painted 50 rocks for the Caitlin Rocks initiative.

This was launched by Caitlin Donaldson, 10, of South Avenue, Henley, who decorates stones with colourful designs then leaves them in various places for people to find and then rehide.

Councillor Hinton said: “We’re so often wrapped up in our own concerns that we forget the small gestures which make people happy. It can be as simple as just giving someone a smile — you don’t really have to go far out of your way to have a big impact.

“Hallie bought a book for her school library and gave a set of nice toiletries to a complete stranger, which was lovely.”

Pupils at Rupert House School were able to wear their own clothes in return for bringing in a new pack of underwear for Smalls for All, a charity which collects and distributes underwear to help women and children in Africa.

The children donated about 800 pairs of underwear.

Head of science Fleur Wells said: “In the western world we take clean underwear for granted but Smalls for All helps third world countries.

“Thank you very much to all the families who supported us.”

About 15 elderly people from Hanover House, a sheltered housing complex, were treated to a free lunch at the Saracen’s Head pub in Greys Road.

Wine was supplied by regulars, many of whom chatted to the guests.

Landlady Mel Roberson said: “Everybody likes to be happy and have a special day. This should be done more often.”