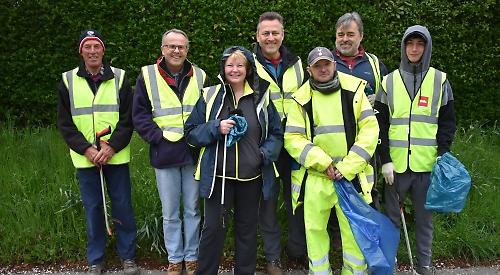 A SOFA, car exhaust pipe and a £10 note were among the items collected during a community spring clean in Sonning Common.

More than 90 volunteers spent about two hours on Sunday tidying verges in the village.

They met at the village hall in Wood Lane before splitting into smaller groups to clean selected areas. They filled dozens of bags full of rubbish.

Afterwards, the volunteers were served tea and homemade cakes at the hall by the Sonning Common branch of the Women’s Institute.

Emma Lawrence, who organised the event with South Oxfordshire District Council, said: “It was really successful and everyone is excited about doing it again.

“More than 90 people registered on the day and there were others in the hall so we probably had 100. We ran out of litter-picks and gloves because so many people took part.

“We collected a massive heap of rubbish. We found a tenner, which we are donating to charity, and one of the kids found an exhaust pipe and gas canisters.”

The council’s waste contractor Biffa collected the bags on Monday. The volunteers wore high-visibility vests donated by estate agent Davis Tate, which has a branch in the village.