Sunshine draws thousands to May Fayre 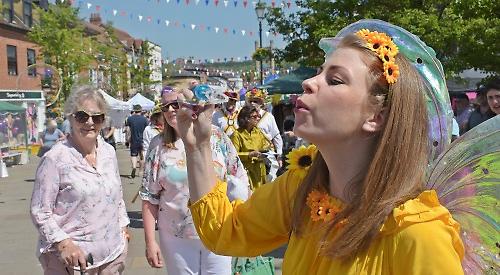 THOUSANDS of people packed the streets of Henley for the town's annual May Fayre.

The event, which was held in Market Place yesterday afternoon, was opened by Henley Mayor Kellie Hinton and special guest Iris Helfner, six.

The youngster, who lives in America and is a family friend of Henley mayor-elect Glen Lambert, spent 73 days in hospital undergoing heart surgery then recovering from life-threatening complications.

There was a May pole dancing display by youngsters from the Steph's Dancing Divas and Dudes performing arts school and Morris dancing by Ellington Morris, of Maidenhead.

George Nearn-Stuart and Ethan Procter, both eight, were crowned this year's May Kings while George's sister Giselle, six, and six-month-old Camilla Birkett were crowned May Queens.

The quartet were judged to have the best fancy dress costumes by Angie Best, who runs the Metaphysical gym at the Henley Business School.

There were performances by singer-songwriters Katie Moberly and Lucy Porda as well as the Rupert House School choir, rock duo Felix and Didi Richardson and soul singer Jamie Bruce.

A tug of war was won by a team from the Row Barge pub in West Street, who defeated last year's champions from the Argyll in Market Place.