No victory as tables are turned in annual schools quiz 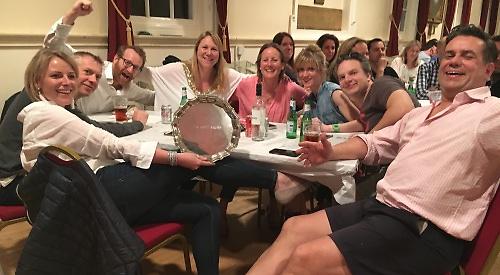 TEAMS of parents and school staff went head-to-head at a quiz night in Wargrave.

The annual event between teams from Robert Piggott Infant and Junior schools in Wargrave and ones from Crazies Hill Primary School took place at the Woodclyffe Hall in High Street.

The quiz was won by a team called No, representing Robert Piggott, comprising captain Caroline Simmonds, her husband Tim, Jo and Jonny Hall, Suzie and Tim Scofield and Nina and Nick Smith. They were presented with a plate.

No’s victory prevented a hat-trick of wins for Crazies Hill.

Dustin Handcock, who helped organise the event, said: “Wargrave primary schools are still basking in the afterglow of the victory. It was a fun and successful night with a great deal of money raised so thank-you to all who were involved.

“Wyndham Lewis, our exuberant host for the night, deserves special thanks for being such a great quizmaster.

“We all wish him the best of luck when he replaces Jeremy Paxman for the next series of University Challenge!” A message on the Crazies Hill school website said: “Thank-you to everybody who came to represent our school.

“Sad to say we can no longer proudly display the winning trophy but we had good fun trying to defend our title. Thank you to the Robert Piggott parents’ association for such an imaginative quiz and for providing a fun evening.”