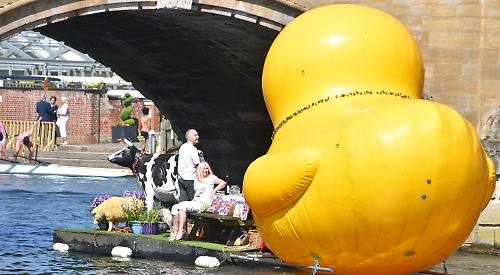 The inflatable, owned by Timothy Dodd-Wilson, had a garland of flowers around its neck and was attached to a floating pontoon which featured life-sized models of a cow and a sheep.

It was one 13 vessels adorned with flowers which took to the River Thames on Sunday for a parade from the Mill Meadows moorings to Marsh Lock.

The flotilla then headed downstream and went under Henley Bridge and as far as Phyllis Court Club before returning to the moorings. The duck became momentarily stuck as it negotiated the central arch of the bridge but those aboard the pontoon managed to bend it forwards so they were able to pass through.

The boats included an aquatic car, canoes, a kayak, open launches, traditional Thames boats and a boat donated by Hobbs of Henley to Henley brownies for the afternoon.

The participants had decorated their vessels with cow parsley, buttercups, banksia roses, lilac and peonies at the moorings before setting off, watched by a crowd on the bank.

The flotilla was the opening event of the fifth annual alternative gardening festival which will end tomorrow (Saturday) with a picnic in the new community orchard, off Paradise Road.

Organiser Victoria Newton, who took part in the flotilla with her husband Barry in their 29ft teak launch Mrs Bouquet, said: “It was a truly uplifting day and it showcased all that Henley is about and showed Mill Meadows in all its glory. There were tourists, residents, local businesses and boat owners all joining together to create a really special day.

“The flotilla just goes from strength to strength and although last year we had more boats, the standard just improves year on year and everybody had really made an effort on the decorating — it was definitely quality rather than quantity. We knew the weather forecast so the pressure was off and everybody was relaxed and had free rein to really go to town on the decorations. I was really impressed by the high standard and creativity. The interest on the bank was enormous, from tourists and residents, and the Goring and Streatley Concert Band playing on the bandstand added to the great atmosphere. Some people had come down especially but others had just chanced across it. It made their day to see this ridiculous British behaviour! It was quintessentially English.”

Sarah Blomfield, from Shiplake, took part in the flotilla with her husband David and daughters Evie, 11, Lucy, 12, and Amelie, 14.

The family’s boat had a royal wedding theme and was decorated with red, white and blue flowers — geraniums, salvias, aquilegias and carnations — as well as flags of Prince Harry and Meghan Markle.

Mrs Blomfield said: “It was a lovely day. It’s wonderful to take part as it’s combining two great loves — the river and gardening — and I wanted to support Victoria.

“It’s also inclusive. It’s a great community event and it’s fun to dress up and decorate the boat and have a day out with the family. Sunday was perfect because the weather was gorgeous.”

After the parade, the participants enjoyed a picnic on Mill Meadows.

The Henley Quakers once again hosted their “peaceful garden” event at the Friends Meeting House in Northfield End on Sunday. Visitors could enjoy tea and cake and explore the garden.

The Berkshire College of Agriculture in Burchetts Green held a heritage day on Sunday as part of the festival. The activities were based on Diana, Goddess of Hunting, in order to raise money for the restoration of a rare statue of Diana of Versailles, which was erected at the college by Joseph Bancks in the 1600s.

Southbrook Cottage in Hambleden hosted a poetry event called “Nature in the raw” on Tuesday with readings about the great outdoors.

The final event, called “Below the Blossom”, will be held in the orchard tomorrow from 11.30am to 2.30pm. Visitors are encouraged to bring a picnic and enjoy the space.