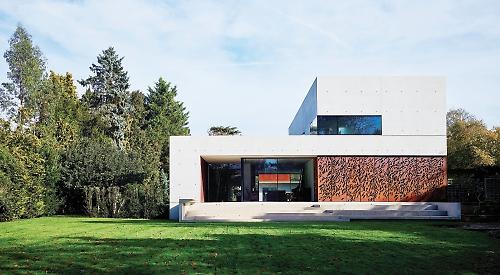 A FUTURISTIC house in the countryside near Henley has been named one of the best new buildings in the South.

Pheasants, a private residence owned by Dick and Judith Fletcher, won the Royal Institute of British Architects’ annual award and the designers Sarah Griffiths and Amin Taha were named RIBA’s project architects of the year.

The two-storey, five-bedroom property on the River Thames at Mill End, near Hambleden, is built in the modernist style with exposed, angular white concrete and large glass sections in the walls as well as a landscaped pond and a separate gatehouse.

It has a number of environmentally friendly features including solar panels on the roof, underfloor heating powered by natural warmth from the ground beneath the plot and a mechanism for recycling warm air inside the house.

The house was constructed between 2009 and 2016 following a five-year legal battle after the couple’s planning application to Wycombe District Council prompted scores of complaints that it wouldn’t be in keeping with its surroundings and would spoil views. Planning officers supported the scheme, saying the Fletchers didn’t have to imitate neighbouring buildings because it was such an original design, and councillors gave consent in 2005.

RIBA’s judges echoed that view when the award was announced at a ceremony on Thursday last week.

They said: “For this project, ideas of convention and compromise do not exist. It has taken more than a decade to complete and has been a titanic struggle but there is no evidence that anything at any scale has ever been downgraded or any difficulty sidestepped.

“The design is extraordinary in its challenge to convention. The site is spacious and south-facing so the diagram for the building could easily be a simple arrangement of lawns to the river, living spaces facing south, servant spaces on the north, a driveway and so on.

“Here, though, the diagram is very different — and all the richer and more rewarding for it. It overturns assumptions about how spaces should be disposed and what they should address. And yet it all works beautifully and the house is clearly a comfort and joy to the clients.

“One might imagine that the interior would be servant to the exterior conceit. Not so. Inside is an unexpected pleasure, full of toplight, dramatic panoramic views and finely crafted features. This house is an extraordinary achievement both by the clients and by the architects.

“The design takes cues from history in its use of water, its axial sidesteps and the relationship between house and outhouse. Then it radically reframes these ideas in a wholly new and unique manner. It is uncompromising and uplifting.”

Mr and Mrs Fletcher, who used to run a children’s software business, attended the function at the Mercedes-Benz centre at Brooklands racing circuit in Weybridge with Mr Taha and Ms Griffiths, whom they recruited after organising a design competition through RIBA. Also present were Malcolm Dodds, a retired architect, of Greys Road, Henley, and his wife Gill, two directors from the Fletchers’ concrete contractor Toureen Mangan and a RIBA mentor who supported the couple during the project.

Only one of the seven other winners, based in Newbury, was a private house. The others included the Thames Tower office block in Reading and three new buildings at the University of Oxford.

Mr Fletcher said: “It was a lovely evening although it went on way past my bedtime! It was very gratifying as we were up against several Oxford colleges which have practically bottomless pockets.

“We were thrilled to bits and honoured and think it is a great reward for having stuck to our original idea with the support of our architects and highly skilled contractors, many of them local, in the face of considerable opposition.

“It was very much Sarah and Amin’s night as the award is ultimately for them, not us. They deserve to be recognised for their outstanding work as they’ve really created something for the ages.”

The Fletchers have now put their home forward for RIBA’s house of the year award and will hear whether they have been shortlisted in the summer.