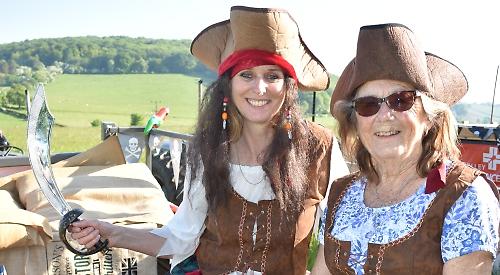 A MOMENT of silence was held for Sir William McAlpine before the start of the 12th annual Chiltern Vintage Tractor Run on Sunday.

Sir William, who died in March, was a supporter of the event which raises money for the Thames Valley air ambulance. Last year he invited the drivers to stop at his home at Fawley Hill for lunch.

This year’s run featured 70 tractors, most of them dating back to the Sixties or earlier, and had a pirate theme.

Some were decorated with skull and crossbones bunting and pulled trailers full of people, many of them in pirate outfits, as they were given a free ride through the Chilterns countryside.

The run began in a field near Fingest where the vehicles were blessed by Rev Sue Morton, associate priest in the Hambleden Valley group of churches.

She said: “I know this year we lost a wonderful supporter of this event with the death of Sir William McAlpine so this year’s run is in his memory.”

She then led the crowd in singing We Plough the Fields and Scatter and was accompanied by Sue Brice on the accordion before blessing the tractors, saying: “May your engines, cogs and wheel nuts never cause you strife.” The convoy then set off and went through the
Hambleden estate, Rotten Row and the Parmoor estate before stopping off at Wycombe Air Park for lunch. After lunch, the convoy made its way back to Fingest.

Organiser Gary Anderson thanked everyone for taking part, the volunteers who helped organise and marshal the run and landowners for supporting the event.

He said: “I’m delighted with how the day went. We had no breakdowns, no one got lost and everyone came back at the end with a big smile on their faces.

“About 250 people actually took part and there were a large number families.”