I made Prince Harry's wedding outfit 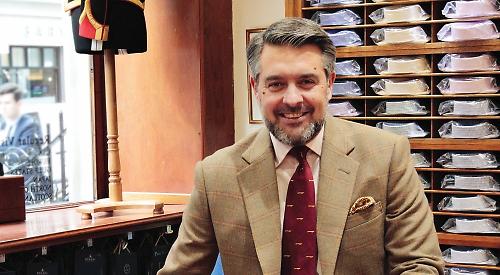 A MAN who oversaw the creation of Prince Harry’s outfit for his wedding to Meghan Markle says he was honoured to be part of the couple’s special day.

William Skinner, from Cane End, managed the fashioning of the frock coat uniforms worn by the Duke of Sussex and his best man and brother Prince William.

His family firm of Dege & Skinner, based in Savile Row, tailored the Blues and Royals uniforms worn for the ceremony at St George’s Chapel in Windsor on Saturday.

It was also responsible for the creation of the four page boys’ outfits, which were similar to those worn by the princes.

The Blues and Royals uniform is the official dress worn by those who have served in the regiment, which is part of the Household Cavalry. Prince Harry, 33, was given permission by the Queen to get married in the uniform.

She also allowed him to sport a beard for the occasion, which made him the first royal in more than 125 years to do so.

Mr Skinner, who took over the running of the firm from his father Michael in 2000, only found out it would be involved eight weeks ago.

The princes’ uniforms were originally made more than a decade ago when they joined the Blues and Royals.

Mr Skinner made Prince Harry a new jacket specially for his wedding. He used 150m of Black Russia, a type of double-ribbed lace, which required 65,000 stitches just for the lacework on the six uniforms.

Mr Skinner, 49, said: “We were asked if we would like to make the page boys’ outfits and a uniform for Prince Harry. It was eight weeks ago and we were honoured to be asked.

“We managed to do it alongside our other military commitments and were very pleased with the outcome and what we have done.

“When they stepped out I was relieved to see the uniform looking good in the flesh. I had the same feeling when the page boys came out. It did look good.

“We had done our work and he was wearing the uniform as he arrived at the church on time.

“Then the page boys turned up and it was reassuring and a relief to see we had achieved our goal. The uniforms were cut and made by hand at the tailor’s workshop.

The detailed sleeve pattern on Prince Harry’s uniform took one member of staff a week to make.

The single-breasted frock coat was made from blue doeskin with a stand-up collar. It also has figured braiding of regimental pattern. It was ranked to major with large gold embroidered crowns.

It showed a badge on the left chest for Pilots’ Wings attained while Harry served with the Army Air Corps flying Apache helicopters.

There were four medal ribbons below the wings which were for the Knight Commander of the Royal Victorian Order, Afghanistan with rosette, the Queen’s Golden Jubilee and the Queen’s Diamond Jubilee.

The trousers, which are officially called “overalls”, were made from a blue and black wool barathea and were fastened by a leather strap and buckle underneath the boot. They would have been traditionally worn while the wearer was on horseback.

The hat was a Blues and Royals Forage Cap (No 1 Dress cap) and there was a white buckskin waist belt with regimental buckle and slings but no sword.

The Duke of Cambridge wore the same outfit, with the Wings attained flying helicopters while serving with the RAF.

The two medals were for the Queen’s Golden Jubilee and the Queen’s Diamond Jubilee. He also wore the Garter Star.

As Prince William is an aide-de-camp to the Queen, he also wore the “EIIR” cyphers on his shoulder straps along with a gold Aiguillette on his right shoulder.

The page boys’ outfits offered a new challenge for the firm as they were considerably smaller then staff are used to making.

All the details, especially on the sleeve, back and collar of the jacket, had to be shrunk down.

On the shoulder straps on each uniform there was gold monogramming with the initials of each boy, which was Prince Harry’s idea.

Staff went to Kensington Palace to fit Prince George, Prince William’s eldest child. They also did a fitting with Jasper Dyer, the other English page boy who is the son of Mark Dyer, a mentor to Prince Harry when he was growing up. The uniforms were delivered to Windsor Castle on Friday morning.

As part of the job, Mr Skinner and his staff kept their involvement under wraps right until the princes and page boys stepped out of their cars at Windsor Castle.

He hosted a party with his wife Camilla for relatives, including his father, who is chairman of the firm and lives in Wyfold, and friends.

He revealed his involvement to his children Harry, 16, and Lucy, 13, when they returned from Pangbourne College, where they are students, in the afternoon.

“It was quite a secret to keep,” said Mr Skinner.“It’s part of our understanding that what goes on is kept confidential and I can understand why that is. Obviously, it has now been mentioned as part of what happened.

“The children were at school so we were only able to tell them when they got back. We had 15 people over for a barbecue party, including my father and stepmother. Our friends and family were very pleased and some were saying the outfits took their breath away. Some had an inkling we have been involved. When I told them it was down to our handiwork they said it was wonderful news.”

To create Prince Harry’s uniform Mr Skinner did three fittings. First, the tailors created the shell of the coat, which was adjusted after a fitting.

Then they took the shell back to the shop, where it was taken apart and put back together with lacework sleeves and collar before a second fitting.

They then checked the changes were appropriate and the uniform was comfortable.

Prince Harry then had a final fitting for a few final adjustments before the uniform was finished and then delivered for the big day.

The whole process took about six weeks. At Prince Harry’s request, the uniform was made lighter and less structured inside to make it cooler and more comfortable to wear.

Mr Skinner said it felt fantastic to be part of the occasion.

“It was great for the whole country,” he said. “We had fantastic weather and people were out in crowds and a day like that makes you proud.

“It was a great display of pageantry, which was traditional, but also had modernity and was forward-looking.

“When the country puts on a display like that it makes you proud to be British. It could not happen anywhere else in the world. You just don’t find it anywhere else.”

It is not the first time the firm has made a uniform for the princes or members of the Royal family.

Dege & Skinner also made the uniforms for the brothers when they were commissioned into the Blues and Royals.

The uniforms were captured on canvas by artist Nicky Philipps in a double portrait which currently hangs in the National Portrait Gallery in London.

It shows the princes in an imagined moment just before they leave Clarence House to take part in the 2008 Trooping the Colour ceremony.

The firm also made Prince Harry’s Tropical No 3 Dress uniform for the Blues and Royals worn when he represented the Queen on a tour of the Caribbean in 2013 to celebrate the 60th anniversary of her coronation.

The company goes back to 1865 and became Arthur Dege and William Skinner in early 1900s when two family businesses came together.

Now it is one of only two firms in Savile Row that is still family-run and it is famous for its military tailoring.

The firm also has royal warrants from the Sultan of Oman and the King of Bahrain.

This authorises it to display the royal arms, indicating that goods or services are supplied to the sovereign or to a member of the royal family.

The company, which employs 20 people, celebrated its 150th anniversary as a bespoke tailor in 2015.

Mr Skinner, 49, grew up in Wyfold and attended Pangbourne College. He is the fifth generation of his family to work for the firm and the third generation to run the business.

His parents moved to the area in 1969 when he was three months old. His grandparents on his mother’s side lived in Harpsden and ran Vincent’s Garages and his father’s family lived in Cane End.

As part of his preparations to run the family business, he worked at tailors and material producers across the country to gain experience in all aspects of the job.

Mr Skinner said: “This gave me an all-round education as well as being involved part-time in London.

“It gave me the skill set to understand all the facets of bespoke tailoring and the lengths we go to serving our clients.

“We have maintained the skills for making military uniforms. It’s a very important part of our businesss and very much part of our DNA and heritage.

Mr Skinner is chairman of the Savile Row Bespoke Association, which works to protect and promote the practices and traditions that have made Savile Row the acknowledged home of the best bespoke tailoring in the world.

The organisation also devises and administers apprenticeship courses to help young people learn the skills and keep them going.

Mr Skinner said time would tell if his firm’s association with the royal wedding would increase business.

He said: “We look back to 1973 when we were asked to make Capt Mark Phillips’s uniform for him and his best man for his wedding to Princess Anne.

“It gave us a point for the company to look back and reflect on sometimes.

“From our military work point of view, it adds to the history of the company and is a notable achievement.

“It helps us to keep focused on maintaining the skills and offering apprenticeships for making the clothes and keeping the business going for the next generation.

“It’s difficult to say what effect it will have but the company has been mentioned in many forms of media in the last three or four days, so only time will tell.

“There has been quite a response and we are very proud to be associated with it.”