Women walk through the night for cancer charity 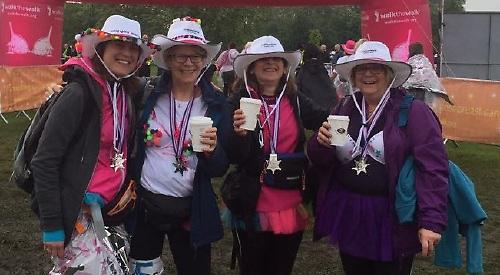 A TEAM of staff from a Wargrave school raised more than £4,500 with a charity walk in support of a colleague with cancer.

The six women from Robert Piggott Infant School in Beverley Gardens took part in the annual Moonwalk London, which takes place during the night.

They were raising money for breast cancer charity Walk the Walk after a fellow member of staff was recently diagnosed with the disease.

A team of walkers from Crazies Hill also took part and raised at least £1,700.

This year’s Moonwalk had a Wild West theme so the Wargrave women wore cowboy hats and gingham scarves as well as decorated bras over their tops, which all participants have to do, and tutus. Mrs Mahoney, who is assistant to the headteacher, said: “The walk was really hard in parts but nothing in comparison to what the women and men who suffer with this disease go through.

“We are very proud of our achievement and with the amount of money we have raised for such an amazing cause. We would like to thank everyone for all their support, encouragement and sponsorship. We are completely overwhelmed with the response.

“At the moment we have raised £4,624.39 with more donations yet to come in, one being from [parish councillor] Marion Pope, who collared all the villagers and has made about £500. There’s another donation from a Moonwalker’s father of £600, so the end total is likely to be nearer to £5,700. This is really fantastic.”

Mrs Copland said: “It was really good but much tougher than I had expected. Walking at night and starting when you should be going to bed was hard but the atmosphere was fantastic and it was a great experience.

“It was great to see the lights of London and the Eye was lit up pink especially for breast cancer.

“We did some line dancing before we set off. I also met an old friend from university who I haven’t seen in 20 years among the 15,000 people.

“We all had a real sense of achievement, although two of us want to do it again and two said ‘never again’. I’m a never again!”