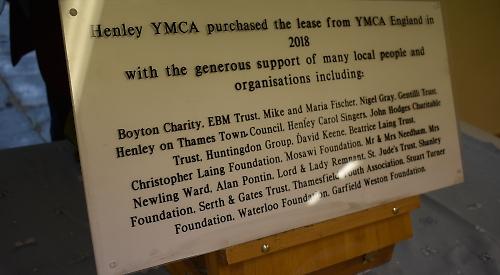 A PLAQUE has been unveiled at Henley YMCA to mark its purchase.

The charity bought the lease on its Lawson Road site in March after raising £570,000.

The money included a £100,000 grant from Henley Town Council and a £170,000 loan from South Oxfordshire District Council.

The other £300,000 was donated by individuals and organisations, some of whom have been recognised on the plaque, which is in the main office.

The official unveiling was performed by Rosemary Duckett, chairwoman of trustees, and Krish Kandiah, from Thame, who is the founding director of fostering and adoption charity Home For Good.

Mrs Duckett said: “The people of Henley have been extremely generous. We can’t thank everybody enough.

Mr Kandiah said: “You are providing a safe place for people whatever their background, creed or race. What you have done is fantastic.”

About 50 people attended the ceremony, including donors, trustees and current and former residents.