School’s May King and Queen crowned with flowers 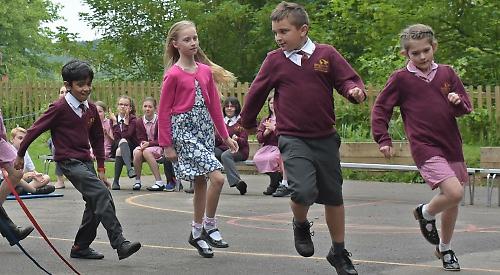 BADGEMORE Primary School in Henley crowned its May King and Queen for 2018.

Riley Boon and Ines Regueiro, both 11, were presented with floral garlands of white chrysanthemums and buttercups by Glen Lambert, the Mayor of Henley, during the school’s annual May Day celebration on Friday.

Riley’s sister Imogen, nine, was made her assistant and given a smaller posy to wear around her wrist.

The children won the roles after nominating themselves for election among their classmates.

They sat on “thrones” and watched as each year group performed a dance around a Maypole in the school playground. Older children performed more complex routines in which they wove ribbons into intricate patterns including a “gypsy’s tent”.

About 75 parents attended the ceremony and sat on benches clapping along to the music. They enjoyed cakes and hot drinks which were sold in aid of the school’s parent-teacher association.

Riley said: “I wanted to be May King because this is my last year at Badgemore and I have decided to have as much fun as I can. The previous May King said it was very enjoyable and a good opportunity.”

Ines said: “I wanted to be May Queen because I love coming to Badgemore and this is something I’ve always wanted to do in year 6 as it is one of my last chances to represent the school.”

Councillor Lambert said: “This was thoroughly entertaining and I can’t think of a better way to end my week. It was certainly a lot more enjoyable than council meetings!

“I had a nice chat with Ines, who says she’d like to be a teacher one day and I think that shows how much Badgemore inspires its pupils. It’s clearly somewhere the children are very happy to be.”

Headteacher Marion Arnold said: “It was amazing to see the children dancing so beautifully, especially the little ones. It takes a good memory to remember all those steps and it was lovely to see the children helping their friends when they forgot where they were. It was a good way to build teamwork and I’m very proud of them.”

Riley added: “I would say that being May King was more scary than exciting but everyone did well.

“It’s great that everyone got the steps right but also surprising because we had a few problems when we were practising.”

After the celebrations, more than half of the school’s pupils were presented with prizes for achieving a 100 per cent attendance rate during the spring term.