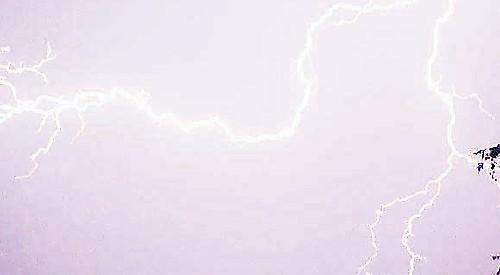 THESE photographs were taken during the spectacular lightning storm over Henley in the early hours of Sunday.

Paul Atkinson, 39, was enjoying a weekend break at the Swiss Farm caravan park off Marlow Road with his wife and two young children when he captured the images.

Thunderstorms and torrential rain swept across the area with dramatic flashes of lightning.

Mr Atkinson, a garage owner from Uxbridge, spent about two hours outside his caravan trying to get the perfect picture.

He said: “I have got myself a new phone which is supposed to have the best camera on it and I thought this was an ideal time to take a look.

“I went out at about 11.30pm. The kids were asleep and my wife was half asleep — I like to live dangerously! The storm rolled in and stayed in the valley for a little while. We’re talking about everything — four- to five-second flashes, sheet lightning and fork lightning — but there wasn’t too much thunder.

“My wife decided to keep one eye open and every now and again she said, ‘are you still alive?’

“I was out there until about 1.30am and then the storm moved on over the hill and disappeared.

“I was outside for most of it until it started raining. I enjoyed it. I would say that’s the best one I’ve seen for a long time.

“My youngest daughter slept all the way through and my other daughter only woke up once.”

Mr Atkinson uploaded his picture on Twitter and it was picked up by the BBC.

He said: “Everyone was coming past the caravan in the morning, saying ‘we’ve seen your photo on the BBC’.”