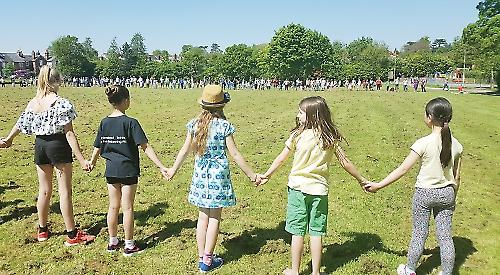 A FREE school in Caversham has been told to think again about its plans to fence off part of a recreation ground for its own use.

Residents are angry at the Heights Primary School’s proposals to use more than 2,000 sq m of Westfield Park, which is adjacent to its temporary site off Gosbrook Road, for pupils to play in.

Members of Reading Borough Council’s planning committee agreed last night (Wednesday) to defer the annexation of part of the park and told the school to come back with alternative proposals.

A separate planning application will be considered at a future planning committee meeting.

It approved the building work to enable the school to expand on its temporary site so that it can take more pupils in September.

The free school already has an arrangement with neighbouring St Anne’s Primary School to use part of its playing field for informal play at lunch times and break times but this is no longer enough as the school roll is growing.

Timber or steel railings would be used to segregate an area during school hours which the Friends of Westfield Park say would be the equivalent of eight tennis courts.

The school is being forced to expand in order to take pupils until August 2020 as it awaits a proposed move to a permanent site at Mapledurham playing fields in Caversham.

Plans for the new school were all but approved earlier this year following a four year campaign which divided the community.

The school says the railings will be removed and the grass area fully reinstated when it does finally move.

The proposed extension involves building a two storey, six-classroom modular unit on part of the St Anne’s site, which would take up 990 sq m of its playing field.