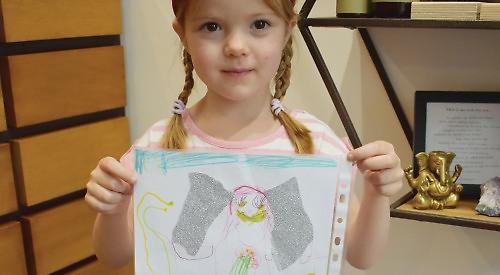 A WOMAN whose daughter drew a picture of her on her wedding day won a makeover.

Sarah McLean, of King’s Road, Henley, entered the Henley Standard’s Mother’s Day competition with drawings made by her children Harriet and Henry.

Judges decided that four-year-old Harriet’s picture, which showed Mrs McLean in her wedding dress using glitter and coloured pens, was the winner out of dozens of entries.

The competition was run in collaboration with womenswear store VH & Co in Duke Street, Henley,(part of Vinegar Hill) and personal stylist Maggie McMillan.

Mrs McLean won a makeover day including clothing to the value of £150 from VH & Co, a personal styling session with Maggie McMillan, of The Style Counsel, at VH & Co, hair by Salon of Chi in Reading Road and a make-up session with Space NK in Duke Street

Mrs McLean, who runs a consultancy business with husband Julian, picked out clothing including a clutch bag and skirt at VH & Co before having her hair and make-up done two days later as she was attending a ball that night.

She said: “The kids love drawing and it was something to keep them quiet. They wanted me to stand there so they could draw me but I was cooking tea so I got my wedding album out.

“I had a lovely time at the shop choosing an outfit and a gorgeous morning at the salon. As a mum, being very busy, it’s nice having this time for me.”

The runner-up was six-year-old Isabella Olinski, who won a styling session with The Style Counsel for her mother Jo.

Mrs McMillan said: “The response to the competition was great and all the entries were displayed in the window of VH & Co and around the shop for the duration of the competition.”

Debbie Austin, owner of VH & Co, said: “We were thrilled to have such an enthusiastic response. It was so difficult to choose a winner. We chose Harriet for her originality.”

Pictured are Nicole Hewitt, of the Salon of Chi, winner Sarah McLean with daughter Harriet, four, and Amanda Andrews, of VH & Co