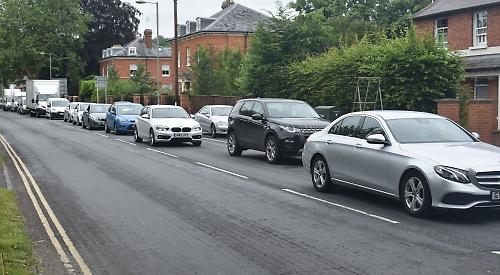 REPAIRS of an 8in deep trench in a major Henley road caused traffic chaos.

Drivers were forced to queue along Bell Street, Northfield End and Marlow Road on Friday as Thames Water carried out the work in King’s Road.

Four-way temporary traffic lights were installed on a roundabout linking the streets, leading to delays of more than an hour.

Thames Water said it was fixing a “dangerous defect” in King’s Road and had to close one lane.

The trench was dug earlier this year to provide a water supply to a house but the temporary filling wore away and the hole re-opened, causing a danger to drivers.

Stefan Gawrysiak, Henley’s representative on Oxfordshire County Council, the highways authority, said: “For two weeks I’d been trying to get them to do a permanent repair because the trench had opened up and people were driving into it.

“The repairs caused chaos with the four-way traffic lights. As soon as I became aware of it I phoned the council and Thames Water and got the lights to be manually operated.

“That improved the situation but it still caused a tremendous amount of traffic chaos early on. There were queues up to Hambleden and the old Esso garage in Reading Road.”

The work was completed at about 5pm.

Cllr Gawrysiak said in future he wanted road repairs to be done at less busy times in order to minimise the knock-on effect.

He said: “I would prefer that any roadworks on major roads are done in the evening, so they doesn’t cause massive disruption.”

A Thames Water spokesman said: “We’re sorry for the disruption our work to repair a leak on one of our pipes was causing.

“It’s crucial we repair these leaks to protect customers’ water supplies and as it was a complicated job took a little bit longer than normal.

“The work was finished at the end of last week and would like to thank residents for their patience during the works.”