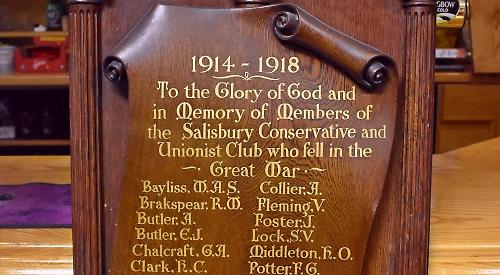 AN historic plaque commemorating 17 Henley residents who died in the First and Second World Wars is to be restored and go back on display.

The roll of honour, which bears the casualties’ names in gold lettering and had hung at the Salisbury Conservative Club in Queen Street for decades, was put into storage after a fire at the building in 2004.

It was briefly returned to the club’s hallway after the blaze but then put back in storage due to a leak in the ceiling.

Historian Mike Willoughby, who researched the lives of Henley’s war dead as part of the Lest We Forget project, learned of the plaque’s existence after reading an article in the Henley Standard’s archives.

He asked the club what had become of it and was mistakenly told that it could not be found so presumably had been destroyed in the fire.

However, he enquired again this year after being contacted by a relative of Arthur Collier, a decorated war hero whose name appears on the plaque.

Mr Willoughby, from Woodcote, went back to the club and spoke to chairman Ray Hayes, who showed him where it was being kept. The plaque features a carving of a paper scroll supported by three Roman-style columns and a pediment with a golden cross.

A chunk is missing from the right-hand column but a replacement will be created free of charge by Chissock Woodcraft, from Hare Hatch.

The names include former Henley MP Major Valentine Fleming, the father of James Bond author Ian Fleming, who lived at Braziers Park in Ipsden and later Joyce Grove in Nettlebed. He was killed by German artillery fire in the Somme in 1917.

Also on the board is Major Ronald Brakspear, whose family owned the former Brakspear brewery in New Street, who died in hospital in October 1915 while being treated for battle wounds.

Mr Willoughby said: “The people I originally spoke to came to the conclusion that it had been destroyed but I obviously didn’t speak to the right person as Ray led me straight to it.

“It was such an emotional moment, it’s a real ‘who’s who’ of Henley at that time. There are some very high-profile individuals on it and I saw it as my ‘holy grail’.

“It will be great to see it restored as the Lest We Forget project has been going for many years and we’re approaching the centenary of the Armistice, so what better way to commemorate it?

“It’s funny to think it has been sitting there this whole time and I’m just so glad it has turned up.

“Every soldier is important to me and if we can’t honour them by this year then people will lose interest, which would be a shame. I am so grateful that the club has kept it in good condition. It’s hard to believe but in the Sixties many of these boards were just taken down and thrown away.”

Club president John Grout said: “As an honourable institution, we kept the plaque because it is a permanent memorial and is meant to be kept.

“It’s a pleasure that Lest We Forget is taking it away for repair and we look forward to displaying it again, although we’ve yet to decide where it’s going to be put.”

Since its launch in 2013, Lest We Forget has erected several plaques honouring hundreds of previously “forgotten” servicemen who died during the conflict.

It has also rededicated the unmarked graves of fallen Henley soldiers and successfully campaigned for the town’s hospital to be renamed Townlands Memorial Hospital.

An 8.5ft wide plaque featuring the names of all 313 soldiers from the Henley area who perished is to be installed in the hospital grounds at the end of the year.

• Mr Willoughby is still searching for a roll of honour for 53 Henley post office staff who served in the First World War. Its unveiling in 1919 was reported in the Henley Standard but it is not known what became of it. Anyone with information should call him on (01491) 680828.