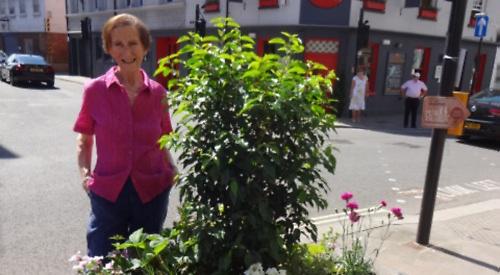 ANOTHER shrub has been been installed in Henley to help tackle air pollution.

Caroline Langler, a member of environmental campaign group Henley in Transition, has planted a Portuguese laurel in a tub on the corner of Friday Street and Reading Road.

The leaves of the evergreen shrub trap pollutants from vehicle exhaust fumes which are washed away when it rains. The bush is surrounded by perennial plants including lavender, strawberry, snapdragon and variegated thyme, with ivy around the sides.

Mrs Langler said: “Until this summer, the planter has always had annuals in it. The Portuguese laurel will absorb some particulates, albeit a very small amount, and also looks nice. I have wanted to bring greenery of any kind into central Henley for years and to extend it further, particularly along Reading Road.”

Last month two planters containing elaeagnus ebbingei were installed on the corner of Hart Street and Duke Street as a trial and up to 30 could be put in place around the town if this is successful.

The levels of nitrogen dioxide in some streets are 50 per cent higher than Air Quality England’s target limit of 40 micrograms per cubic metre.