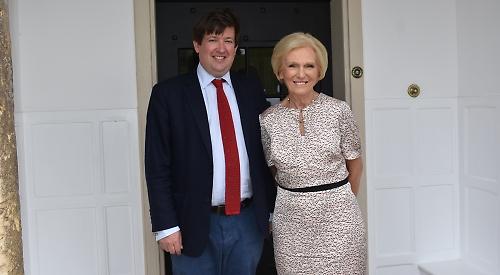 THOUSANDS of people attended the first ever Stonor Food Festival over the weekend.

Television presenter Mary Berry, who has a house in Henley, did a question and answer session, signed books for fans and spoke with many stallholders when she appeared on Sunday.

Great British Bake Off finalist Steven Carter-Bailey did a demonstration where he made a cheesecake.

There were other demonstrations during the event at Stonor Park including one by Nick Galer, the chef-proprietor the Miller of Mansfield in Goring.

Other topics covered by experts over the weekend included foraging, wine tasting and beer tasting.

A tent was set up where families could sit and watch the football World Cup while enjoying their food. The tent was decorated with the flags of each nation taking part in the tournament.

There were more than 50 stalls selling food and drink from across the world including Argentinian empanadas and Lebanese shawarma. Local producers including Loddon Brewery and Watlington Fine Wines also ran stalls.

For more coverage and pictures see this week’s Henley Standard.