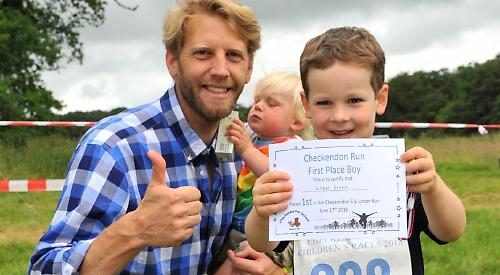 More than 120 people took part in the 10km, 5km and children’s races on Sunday.

The 10km runners went to Ipsden and then along Braziers Lane before climbing back up to Checkendon.

The first man home was Ben Paviour, from Sonning Common, who finished in 36 minutes and 57 seconds. Second place went to Jesse Elzinga, headmaster of Reading Bluecoat School in Sonning, in just over 39 minutes.

Triggs Hodge, who lives in the village, started all the races and presented the prizes, including one to his son Sebastain who was second in the five and under boys’ race. All the finishers received a commemorative medal.

Organiser Hannah Pivonka said: “The children were delighted to see one of Andrew’s medals and a few lucky ones even got to try it on.

“All the children tackled the challenge with such enthusiasm and crossed the line with huge smiles on their faces, rightfully proud of their achievement. There were some wonderful exhibitions of determination and sportsmanship.

“The 10km showed off Checkendon’s beautiful countryside and one runner described it as the most stunning route he had ever had the privilege to run.”

Ms Pivonka was helped by Charlotte Nicholl, Ali West and Brian Cullen. She thanked Bill Beeton, of Hammonds Farm, for the use of his land, the 20 marshals who directed runners, the sponsors and the businesses that provided raffle prizes.

The proceeds will go to Checkendon Pre-School.

Next year’s event will be held on June 9.

The top three in each of the children’s races were: